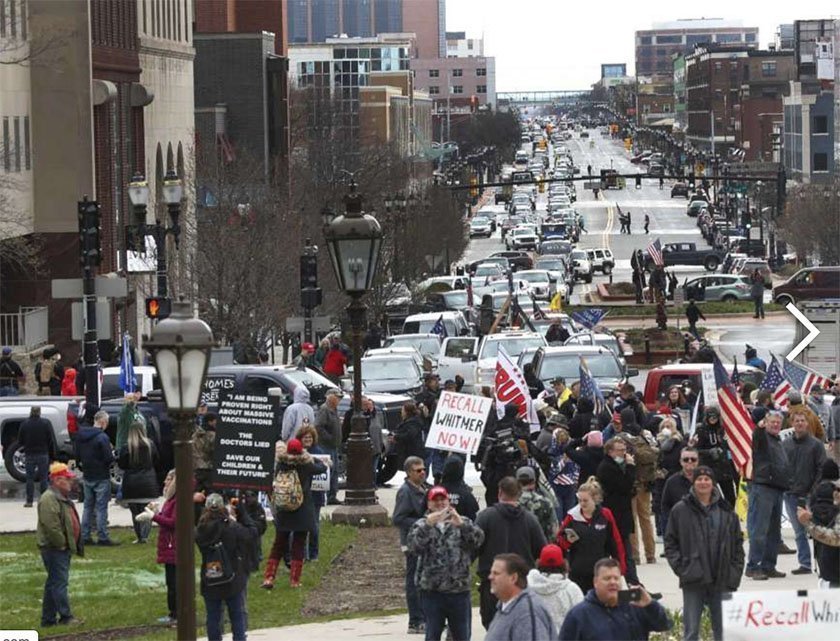 On April 15, thousands of flag-waving protesters drove past and took to the steps of the Michigan state capitol at Lansing to show their displeasure with Gov. Gretchen Whitmer’s orders to continue her state's lockdown.
T

here comes a point in any crisis when agreed-upon policy begins to outrank the details of the crisis itself, taking on a life, character, and righteousness of its own.

In the case of the coronavirus that point has been reached in Europe, with most governments steadfastly endorsing national lockdowns as a means of defense and in the hopes this will allow them to reopen more swiftly. Sweden and more importantly Germany have dissented from this view, imposing only partial restrictions while so far managing to avoid the worst of the scourge.

The case of the United States is far more complex, with a tempestuous and impulsive president not yet willing to fully come down on one side or the other, giving each an occasional wink but growing increasingly angry at the economic damage internal sanctions — and lockdowns are just that — are causing his previously stable nation.

China, another key player, watches to some extent from the sidelines, since its authoritarian nature allows it to shift position as necessary. Moreover, it generated the virus, so any move it makes it must make gingerly, at least in this stretch. Its medical experts have been useful to Europe and its hardline view of how to handle the virus all but shaped Italy’s seminal response.

With Europe appearing to have agreed on a gradual reopening process that may last through the end of the year, all eyes are on President Donald Trump, who cannot wait that long. The U.S. goes to the ballot box in November and Trump’s management of the crisis will be under scrutiny by his Democratic Party foes, with former Vice President Joe Biden the frontrunner in the bid to challenge Trump.

Democrats are leaning toward European caution and Trump toward a back-to-business approach.

As has been the case for more than a decade, the U.S. is ferociously riven along party lines, with Trump admirers supporting his ever-shifting tactics and enemies finding more to loathe about him each day, if not each hour. That is a tediously vicious battle that will only deepen in the coming months, serving no one in any useful way.

In a few short months, the debate over Trump’s credibility in the wake of failed impeachment efforts have been set aside to focus on a medical crisis that has itself become politicized, with Democrats leaning toward European caution and Trump toward a back-to-business approach. Both sides are making moves, with one eye on infection counts and death tolls in much the same way as Cold War analysts studied who might come out on top in the event of nuclear war, “on top” no more than a synonym for survival. Winning any such war seemed implausible.

While the virus pales in comparison to the prospect of nuclear combat, a president saddled with a million losses isn’t likely to hold his own for any length of time.

And this places Trump, a maverick if there ever was one, in a bind. If he re-opens and all goes relatively well, in the German vein, he’s a hero to the business community and to his own, a surefire winner in November. If his damn-the-torpedoes approach is met by a second viral wave or a notable increase in cases, he’s suddenly vulnerable, his presidency gored. At that point even his staunch base would be hard-pressed to save him.

That’s why temporizing is the order of the day, distraction with it. He jousts with medical advisors, insulting his lead man. He creates additional panels and task forces to examine the disease in hope others might support him unconditionally, allowing him to blame these new experts if anything goes wrong. As always, he blames people and organizations across the spectrum to deflect attention from his own inconsistencies.

In some cases, his blame is largely in order. The World Health Organization (WHO) has been hugely uneven in its handling of the worst health emergency in its history, lauding China only to discover that it had falsified its casualty count. A powerful and charismatic WHO chief might have helped fill the leadership breach and implored all sides to come together in the manufacturing of test kits and the establishing of uniform standards over what constitutes death-by-virus. That is still contested, with some states recording deaths including patients that had severe pre-existing conditions, others stipulating the virus and its complications alone.

The European Union’s response was all but nonexistent, as most feared it would be a time of pan-European crisis. It lacks an effective executive, leaving Germany and France to contest supremacy. In this case, Paris and Berlin have adopted different approaches, further muddying already muddy waters. Italy has steadfastly maintained the Chinese total lockdown philosophy, and will face a decimated economy when the sickness recedes.

This places a greater onus on the American response.

Trump is a full-fledged isolationist with no interest in furthering anything more than his own country’s interest, and his own. He will not behave as Harry Truman did in the wake of World War II, creating the Marshall Plan to help so-called free Europe recover from its collective devastation and prepare to meet its next massive adversary, the Soviet Union. The U.S. investment was both pragmatic and ethical, and perceived as a fitting response to a Western world that had just rid itself of Nazism and Fascism. Internationalism and its offspring, globalization, grew out of the first postwar decade. That Trump has no interest but self-interest is now apparent to Europe and the EU, which long ago dropped any illusions this postwar amity could be maintained as it has been for seven decades. The virus merely seals a done deal.

Trump is a full-fledged isolationist with no interest in furthering anything more than his own country’s interest.

Biden, a two-time vice president, is a confirmed internationalist schooled in Cold War tradeoffs and the importance of negotiation, even with enemies. He was a key player in Barack Obama’s Iran nuclear deal, since dismantled by Trump. He is well-known in many circles, both for his stubbornness and emotionalism. He is by all accounts a decent and balanced man who in his own prime was unable to muster enough support to win the Democratic nomination. That he was most active in the Ronald Reagan years did him no favors. Reagan was flawed but beloved in the way Trump is flawed but despised, at least by some.

A Biden victory, in the event he wins the nomination, would redraw the map yet again, with the U.S. reasserting its willingness to contribute to international dialogue.

The catch, however, is that Biden must hew to Democratic caution on the virus. That would mean any return by the U.S. to the global trade scene would come in stages, as would its own economic rebuilding. Bottom line, many who do not wish to wait would have to wait if Biden took over. He’d place life-saving and health security ahead of all else.

Trump is not burdened by such complications. He can at any time demand a return to work and nudge it forward – and some nudging will be necessary given months of pandemic paranoia. He might have to go to war with the governors of two key states, New York and California, both Democrats, who favor a more gradual return. Pushing to overrule their jurisdiction in their home states would surely produce a secondary legal crisis, with presidential authority called into question. Even Florida, a pro-Trump state, might find it hard to restore normalcy given its vast population of retirees, a group Trump cannot alienate.

Trump in fact finds himself between a proverbial rock and a hard place, and its constraints have re-ignited a pattern of lashing out unpredictably.

What is most likely is an American return to full operation, but not in the timeframe suggested by Trump’s April tempestuousness. Instead, the president is likely to look forward to summer, putting as little time between re-opening and the election as possible, this to buffer him from backlash if the virus refuses to cooperate. Acting now would leave him vulnerable to summer reversals that would undermine what he’d like all to see as his bravura.

Sturm und drang may still contain a dose of wait-and-see, with firings and hirings to keep the Trump theater lights on for the duration of what will be a cruel and stormy sequence of rude and bitter months.