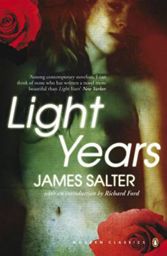 What is this? A chronicle of a marriage? A story of how men and women grow brittle and apart in the “one long day” that is life? Or is it, in one of Salter’s quivering words (pixels spun from a dexterous wand), “innominate,” unavailable to taxidermy? It is 1958. Vladimir “Viri” Berland, 32, and Nedra Carnes, 28, are an affluent young couple with homes in city and countryside. They have two daughters, a dog named Hadji, a pony, and an abundance of facades. Tall Nedra, from Altoona, daughter of a salesman, is dreamily restless and smokes small cigars. She has one love affair and then another. She reads Proust and Pavese; men are her art. Viri, shy, ill-formed (“so dependent, so foolish”), has his own minor dalliance, but it stalls, becoming a lifelong haunting.

As the years pass (Salter carries the broken couple into their late forties), passions come and go, friends enter and fall away. Viri is Nedra’s Deadalus, an admonishment. She is his wanton Icarus, “thrillingly vulgar,” unheeding, flying. Her journeying life — growth, disappointment, enlightenment, and sickness — is done in loving needlepoint. Viri is by contrast decent but unaccomplished, timid perhaps because he’s kindred to the female (the consummation of a late love affair with Lia, an Italian, in Rome is “shameful.”) Confident Nedra (who turns to yoga, palm-reading, Tarot cards) seeks a “pilgrimage through vanity” — “With your life. You must become free,” she says. Salter isn’t so sure: “Life is only appetites until the teeth are gone.” This novel’s teeth are beautiful but soft. It chews many edges without getting to a core. Depth is style’s make-up, but little more.

Viri’s Roman coda — he marries Lia — is vivid but largely in the service of what is transformed into an elegant tear-jerker. Still, few can do so much so simply as Salter. Headed for Europe aboard a liner, Viri dines: “Beneath him as he lifted his spoon, fish were gliding black as ice in a midnight sea. The keel crossed over them like a comb of thunder.” Salter is a dream-writer.