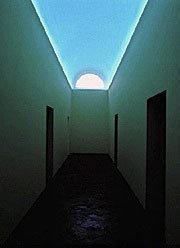 hile studying art history in graduate school, I read about something unlikely: A collection of contemporary American art — Rauschenberg, Carl Andre, James Rosenquist — equal to any in America, in a villa near Milan. It allegedly belonged to a man named Giovanni Panza di Biumo whose bank-clerk looks hardly fit with his avant-garde collection. It was all true.

For 50 years, Panza di Biumo and his wife, inspired by love for art, purchased and commissioned pieces from unheard of, difficult artists whose work is now essential to understanding any significant art movement since the 1950s. A few years ago, in another act of affection, they spread their collection among more accessible museums, including Los Angeles’ Museum of Contemporary Art and New York’s Guggenheim. The ones that remained in their 18th-century Varese villa they donated to FAI (Fondo per l’ambiente italiano, a sort of Italian National Trust).

It took me years to overcome my “it will always be there” resistance and visit the Villa Menafoglio Litta Panza di Biumo in Varese. I wish I’d gone sooner.

It was a beautiful spring day, the sky crystalline and blue. Snow still dotted the mountains behind. Bare branches in the garden wakened and stretched in the warm spring sun. Visits to museums or galleries on fine days usually have me walking out into the sun wondering if I wouldn’t have gotten more pleasure outside than in.

But what’s special about this collection is how outdoors and indoors, nature and art, enrich each other. Light and color are the ingredients of a splendid day and also of most of the collection’s pieces. If you want to be scientific, light makes color. (You can’t have one without the other.)

The Panza collection’s best-known works are Dan Flavin’s fluorescent light installations, particularly the “Varese Corridor” that the Panzas commissioned for their converted stable in 1976. While last year’s Flavin retrospective at London’s Hayward Gallery was moving and encyclopedic, the works on display were objects in a museum. At home in Varese, the colored neon tubes occupy white spaces and radiate a spirituality unimaginable in a mere light bulb.

Also in the stable are works by James Turrell and Robert Irwin. Read about Turrell’s “Sky Space I” or Irwin’s Varese “Window Room” and you might suspect parody. But seeing an Alpine sky or view through these abstract “windows” is something else again.

In the stable wing, light dominates. In the residential part of the villa, it’s color.

Alfonso Fratteggiani Bianchi’s monochromatic squares are only color. Pure-powdered pigments spread and ground into pietra serena are so velvety that it’s hard to believe there is stone beneath. The neo-Classical Salone Impero features two of David Simpson’s huge iridescent quadrangles — “Quicksilver Shift” and “Dear to Saturn” (Sapphire). As pure and austere as the room’s rigorous antique order, they also suggest non-existent depths. You think a hand sunk into one would disappear into a pearly mist. But no, it is only canvas. Such resolutely two-dimensional works say almost more about Western art’s obsession with pictorial space and perspective than some of the Renaissance’s most virtuoso three-dimensional trickery.

Giuseppe Panza di Biumo’s catalogue texts are elegant and simple. “Informazioni per chi ha dubbi sull’arte nuova esposta a Biumo” should be required reading for both opaque contemporary critics and proud philistines who believe “My four-year old could do that.” Panza is all but rueful in describing the works — now worth a fortune — that he and his wife bought just because they were belli, migliori, or brought piacere. “We believe in beauty,” he says.

Today, beauty and pleasure are often code words for facile, superficial, too-easily accessible or unengaged with “serious” issues. Panza’s short essays respond to this. He discusses minimalism, perhaps the most hermetic of contemporary art trends, tracing its origins to Plato. He explains the pre-eminence of the idea in 20th-century art and notes that all art is minimalist in its search for fundamental forms.