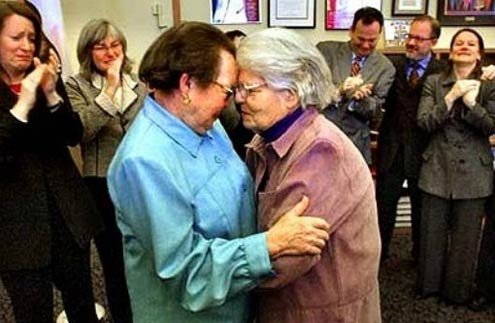 Phyllis Lyon, left, and Del Martin were the first gay couple to be married after San Francisco Mayor Gavin Newsom allowed same-sex marriages in 2004. The couple had been together for 51 years.
A

bout 15 years ago, just before changes to the Canadian marriage laws that allowed same sex partners equal rights, privileges and obligations, Neil went home to his farm north of Toronto to visit his mother. When he entered the house he found both his mom and aunt at the kitchen table busily stuffing envelopes with fliers opposing the legislation on behalf of their local priest. The priest saw it as an attack on the Christian family. At the time Neil’s mother did not know her son was gay.

Whenever the issue of homosexuality and family emerges in the press I can’t help but feel my life is on trial. What’s more, I feel like the jury is stacked with people who resist understanding because my life and family don’t resemble theirs.

I’m an anthropologist. My training has taught me to know families come in a variety of forms and configurations. Above all, a family is an adaptive social strategy that ensures the survival and well-being of the collective and individuals within it. Young and old, strong and weak, fundamentally interconnected, they share biological and social histories. Marriage, babies, and adoptions are the most common ways for family groups to reproduce over generations. That’s what being human is about.

Politics and morality aside, homosexuals are born into families, both rich and poor, in all societies and cultures. Like heterosexuals, we spend our lives trying to do the best we can based on what we have to work with. Along the way, we laugh and cry and love and hate. When we die, we hope it’s in the company of our families and the ones we love.

It is generally accepted that homosexuals represent a remarkably stable 10 to 15 percent of the world population, which means homosexuals are, and have always been, a component of the family structure. Baby boys and girls are being born who will one day grow up and fall in love. Some will fall in love with someone of a different sex and some with one of their own sex. Both will express that love emotionally, socially and physically. They will form partnerships and families that are the core of their lives.

Politicians can choose to ignore this reality and deny homosexuals full participation in the social and legal system of civil society or they can, as a growing number of voices coming from both the left and right indicate, accept the idea of equality.

President Barack Obama, in a television interview, recently gave careful support to same sex civil union. Gays and lesbians, he said, should be treated with dignity and respect and the state should not discriminate against them. Civil unions are a legal right that states should recognize.

Gay life in Italy is always difficult, observed Feltri. People cling to prejudice, preferring to underline differences as a way to discriminate against those they don’t even know. He pointed out that when homosexuality comes up the terminology used often is derogatory and vulgar. In the newsroom, Feltri added, journalists hide under their desks rather than show open support for gay issues such as same-sex unions. Men often make vulgar jokes and ridicule the issue, even if homosexuals are present and working in the newsroom.

His main thesis was simple: Love has the same intensity and creates the same effects for gay people as it does for straight people. Feltri praised leftist parliamentarian Paola Concia and journalist Maria Teresa Mieli, journalist for their autobiographical account of their struggles as lesbian, “La vera storia dei miei capelli bianchi” (“The Real Story Behind My Grey Hair.”) If, as he believed, love is a universal feeling that can be experienced by any individual, why should homosexuals be excluded?

The title of Feltri’s article, Amore e Fame Valgono per Tutti Anche per I Gay (“Love and Hunger Apply to All, Including Gays”), comes from old Milan saying. His heart, said Feltri, beat no stronger than anyone else’s, but that if members of a society seek human rights for themselves, they must also desire the same for others.

Both Obama and Feltri also examined the role of children, with Obama recognizing that same sex parenting was already a reality. Feltri wondered how he might feel if one of his children were gay and noted the prejudices that such a child would face. Gay people still represent a hidden class, an untouchable caste.

While Obama and Feltri come from different political backgrounds, both reach the same conclusion. The left-right divide is waning. A growing number of people, whatever their political orientation, are beginning to recognize homosexual rights as a human rights issue.

Recently, the Pope Benedict XVI visited Milan to celebrate the annual congress in defense of the family. Millions of the faithful heard and believe what he had to say. Although a number of Christian groups support homosexual rights, such as the Valdese in Italy, religion remains a major obstacle to civil rights, dignity and justice. From a secular point of view, the Judeo-Christian debate appears to hinge on how God is perceived. Is God loving and accepting or dogmatic and vengeful? It’s a fierce debate.

Whether by divine or random biological chance, I I was born homosexual. Being a homosexual is only part of who I am, but just as much a part as my heart and my smile, which I cherish. My family and loved ones are as precious to me as yours are to you.

Neil’s mom now knows that her son is gay. And she accepts it. He and his partner of more than 10 years visit regularly. That’s just a small piece of their family story.