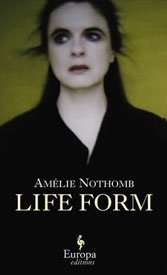 By Amélie Nothomb, translated from the French by Alison Anderson

Amélie Nothomb’s slender fiction presents itself as the first person story of a bizarre hoax. But below that topsoil is a subtle story about writing (letters and books), deceit, and the meaning and marring of personal sensibility.

In 2009, Nothomb receives a letter from a down-and-out GI named Melvin Mapple who claims to be based in Iraq, his only true friend a second self he’s nicknamed Scheherazade. That “companion” is his 400-pound frame: he eats, he insists, to ward off war’s trauma. The credulous, web-averse Nothomb buys into the premise, never considering that the U.S. Army might have weight limits. The two begin a yearlong correspondence in which the confessional Melvin tells of his life and disorder, and Nothomb, fascinated by such bizarre and shameless candor, responds with a careful mix of genuine curiosity and compassion.

Melvin claims his obesity has estranged him from anyone but his own kind. To which Nothomb replies he should see himself as “surfing the wave of artistic modernity,” a tongue-in-cheek reply Melvin takes seriously (“My obesity has become my life’s work,” he says, thanking her.) When he finally sends a photo at her request, she sees a “pudding,” a “ton,” a “naked, hairless thing … “

Their old school mail exchange — which continues until Melvin vanishes — highlights key differences in sensibility between European Nothomb — at times pretentious, “my European prudishness,” she says — and Baltimore poor-man Mapple, “a solitary fat man” whose confession is his life force. It also underscores the extremes of 21st-century life: endless web time, obesity as a Scarlet Letter, and the American paradox of dishonest sincerity, all of which Melvin embodies.

Nothomb — “A novelist who writes to her readers on real stationary,” marvels Marvin — offers herself up as a “vegetable patch” for the imagination of others: a dedicated if quirky writer who accepts the “hegemony of letters” in her life. As a result, “obese inveterate liar” Marvin Mapple isn’t just a character but voice emerging from a postmodern pit, one whose contours Nothomb skillfully delineates, making language into its own life form — if only translator Alison Anderson better understood the suppleness of American rhythms. The French title, Une forme de vie, suggests less of a life form, as in Elephant Man, than a form of life, and its choices.