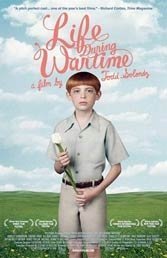 The “update” gets started when loony Joy (who works with cons and rapists) takes a break from husband Alan (he of the crack) to visit middle class Trish in Florida. Parallel to this is Bill’s release from federal prison. Cash-starved, Bill sleeps with self-hating lush Jacqueline (Charlotte Rampling) in a motel and then tries stealing from her purse, a scene as devastating as it is pathetic. Timmy, meanwhile, wants his mother to tell him just what a pedophile does.

Though Solondz’s narrative seems to yearn for forgiveness, the war to which the title refers makes it clear that everyone’s still standing by their guns and that the damage done isn’t going anywhere. His children and adults live in a perpetual fetal position, defensive and suspicious and afraid of either dads and terrorists, or both. The Gothic brio that “Happiness” depended on for comic relief is unavailable here, so much so that when Trish tells portly lover Harvey (Michel Lerner), “Fuck family. Fuck motherhood. Fuck the kids. I don’t care anymore,” the outburst sounds more believable than the later apology.

Solondz is a smart, mature filmmaker with a great sense of satiric timing and a take-no-prisoners outlook to guilt-ridden American Judaism, but as self-proclaimed “monster” Jacqueline tells Bill during their one night stand, “In my family there can be only winners or losers,” and “Life During Wartime” is all about the latter. Expect no carry-overs from the original cast of Dylan Baker (Bill), Cynthia Stevenson (Trish), Jane Adams (Joy) and Lara Flynn Boyle (Helen).