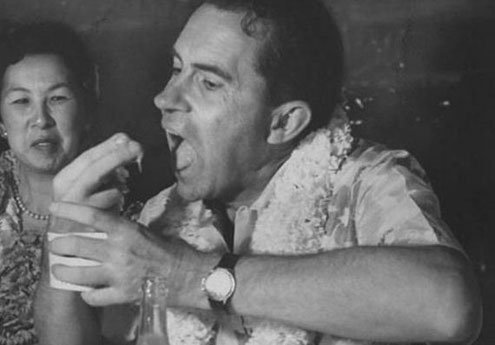 Good to know, but if I’d wanted reality I would have rented “The Sexual Activity of the American Fruit Fly.”

But there are times when reality imitates ice cream and pizza guy fantasies.

Alberto recently had a night shift leaving me at home camped out in front of the TV in my underwear. Ten minutes after we kissed good-bye — Alberto abandoning me to attend to the needs of the frail and sick — our front door buzzer rang. I was baffled.

Like most Italian apartments, we have two “outer” buzzers, one for gate and for the front door of the building. It’s rare that anyone gets the door without being first buzzed into the building.

My first thought was Alberto. Maybe he’d forgotten something. So I strolled to the door in my underwear. But it was not Alberto. Standing in front of me was a gorgeous young man, smiling from ear to ear and holding two cold beers and two pizzas. Lights! Camera! Action!

Wait, I told myself, this couldn’t be true. It had to be some kind of joke. At first I looked toward the stairs to see if Alberto might be lurking behind the door waiting to spring out and mock me.

But that, I knew, was highly unlikely. My husband comes from a long line of humorists and Milan is a place that considers puns, not practical jokes, as the highest expression of humor.

I opened my mouth to say something to Mr. Pizza but all I managed was a squeaky “Hello.”

Eyeballing nearly-naked me, he replied with a movie-like, “Pizza?”

The next line I knew from the movie. I was supposed to say: “Oh yes, come in. I seem to have forgotten my pants.”

He slowly arched an eyebrow. “Are you sure?”

I desperately tried to think of my next line. Suddenly, the door across the hall opened and my mother-in law and cousin Sergio hung out their heads like two moray eels in a rock crag.

Last summer, a gelateria opened a few doors down from our apartment. One day I went in to get a cone. Behind the counter stood the ice cream guy dressed head-to-toe in white, basically the ice cream guy uniform. In his case, however, his white cotton drawstring pants were almost transparent. He greeted me in the open, friendly Italian southerners do and offered me free sample of various flavors. He seemed almost too friendly, flirtatious even.

When Alberto got home that evening I told him about the shop and the cute ice cream guy. He immediately suggested we pick up a tub of ice cream for an after dinner treat. In no time, we were on a first name basis with Angelo, Mr. Ice Cream.

After a while, Angelo would give us free samples and scoop out large portions while charging us for a medium – the warm-up to the perfect summer fantasy.

Since Angelo tended to close his shop at the first sign of rain (yes) and took weekends off, he was never able to build up much of a client base, aside from Alberto and me. The shop was mostly empty.

One day, Alberto and I dropped into Angelo’s for a treat. There, seated behind his seldom-used cash register was a… woman. Her ample breasts strained the fabric of her low-cut black sequined Lycra T-shirt. She was a black cloud threatening to spoil a sunny day.

“This is my mother,” said Angelo. “She’s decided to come in and watch me work.” Angelo shrugged.

We pasted on smiles and greeted her.

After that, Angelo’s mother was perched in the shop like a vulture, as if waiting for some weak and feeble creature to collapse so she could feed on it.

In August, Angelo got ready to close up and take the rest of the summer off. Before leaving, he loaded us up with a couple of liters of ice cream. “It won’t keep,” he told us, “so you guys might as well eat it.”