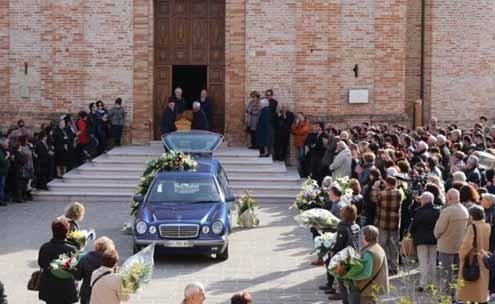 Being at a funeral also means being seen.
I

The locals here live forever, long enough to forget all their children’s names, or fall ingloriously asleep at the hairdresser’s, or put their car in the wrong gear and ram parked cars. Yet they still have time to plan their funeral to the tiniest detail.

They live so long they make regular trips to their future burial site just to get to know the neighbors and calculate the distance between their plot and their beloved late marito-moglie-mama-babbo-zio. They pester relatives that will outlive them with sharp requests about their graveside outfit and the priest who will administer their final mass: If it’s Don Lido (a.k.a Don Litro because he likes to drink red wine by the liter), they warn of endless haunting.

Over time, the final act comes to feel like a forgone conclusion. The sadness is there, but you braced before it hit.

That wasn’t the case for the funeral I attended last week. A colleague of my husband’s, just turned 60, was diagnosed with cancer. There is some discussion over whether he knew he was going to die. Some friends say he did and said so aloud, others that he believed he’d survive.

I only knew him by sight, but I attended the funeral. I had only ever been to one other funeral in Italy, the untimely passing of one of my husband’s distant uncles. I remembered only the sound of the mini-bulldozer as it pushed the dirt over the grave with the shrill beeps of a truck in reverse. The sound left such a deep impression couldn’t think of death, funerals or cemeteries without it playing in my head.

In Italy, the deceased are buried within 24 hours and my husband’s colleague was no different. The veglia, or wake, was held hours before in a corner of the breakfast room at our local nursing home (we have no mortuary). I didn’t say it at the time, but it seemed the equivalent of shaking a steak at the cows as they moved along the abattoir conveyor belt. Yes, of course, the elderly in the home know how the story ends, but do they really need a daily reminder?

I believe wakes are family affairs. So I stood at the doorway and averted my gaze. Call me cold and Anglo-Saxon, but I wouldn’t have wanted this veritable stranger staring at my dead body and I assumed he’d have felt the same way.

Please, turn the phone off…

But small town life is always a Catch-22 and I was plagued with the thought that I had somehow blundered. That all the other veritable tear-soaked strangers were appalled that I hadn’t looked.

Appearance is everything in my town. I am always getting into trouble for not saying hello to people who are strangers to me, but known to my husband or my parents-in-law. They seem to forget that I didn’t grow up here and don’t know everyone. They run into my husband and whine about what a snob I am. In the interest of avoiding arguments, I now wave to literally everyone I see on the street. It’s funny when they don’t recognize me, but they still wave anyway, social fakery at its finest. Ridiculous doesn’t come close to describing the situation, and I’ll probably never know if I committed terrible slight at the wake. At the poor man’s funeral I was surprised to be joined by what felt like the entire town. People packed the church to the door and into the courtyard and street. Most couldn’t even hear the mass, but they still stood for the entire service.

So much of me would like to regard this as a beautiful demonstration of community values and solidarity. But the cynic in me focused on appearances.

You love to imagine small Tuscan towns as being sweet little enclaves of neighborly affection with everyone coming out to lend a hand. But the truth is most people think only about themselves, with the difference between rural and city-dwellers that the former allot a large chunk of the day (when they’re not eating, sleeping or plotting to steal their neighbor’s land by gradually moving their fence line) to gossip.

Case in point, my next-door neighbor. She’s a bitter husk of a woman who passes the time arguing with other locals over our only available parking space, which she believes is rightfully hers because she pays more in electricity than he does. She’s never seen his electricity bill, but she can feel it in her bones — at least that’s what she tells me.

She was front and center at this funeral, her accustomed spot. Either she intimately knows every person who dies regardless of age or gender or won’t turn down any opportunity to be seen. This made me wonder how many other people had attended the funeral for the same reason. After all, I was there because I didn’t want to commit my nth social faux pas. Others were there because it served them politically or socially. One elderly lady had an entire phone conversation in front of the church. If she didn’t care enough about the deceased to behave respectfully, why even come?

Then again, maybe it doesn’t matter. Maybe all that does is the solidarity and how comforting it must have been for the man’s family to see all those familiar faces, whatever their motives.

As always I was reminded of one thing and one thing only: I’m not from around here.