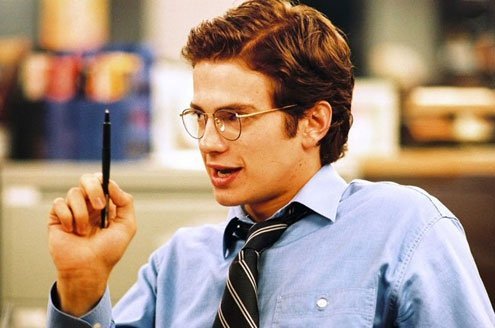 t the time of its release, Billy Ray’s 2003 “Shattered Glass” was not the only media-history show in town. In a celebrity contest Ray stood no chance of winning, his up close-and-personal look at 1990s journalistic bad judgment came up against George Clooney’s “Good Night, and Good Luck,” a smoky snapshot of the Edward R. Murrow 1950s TV era. Critical acclaim couldn’t offset the reality that a big movie with Clooney would obliterate a smaller one without him. And that’s what happened.

But Ray’s film remains a keeper.

Hayden Christensen plays serial fabricator Stephen Glass, a wunderkind twenty-something New Republic journalist who beginning in the mid-1990s churned out one drop-dead scoop after another, complete with perfect quotes. Perfect except that most of it was made up. Working under protégé Michael Kelly (Hank Azaria), the cloying, baby-faced Glass was for a time the famed magazine’s Boy Scout: trustworthy, helpful, and apparently loyal. He was also eager to succeed, but never, it seemed, at the expense of alienating anyone.

The underrated Christensen is ideal in the Glass role, projecting false modesty, mischief, and deviousness in one package. His urge to plagiarize and invent was intended less to wreak havoc than to attract attention and approval.

Christensen is best when the scam collapses: he’s a little boy who can’t decide if he wants to apologize or hide in the bathroom. There is no cinematic lip-gloss here. Ray, who would write the screenplay for the 2013 hit “Captain Philips,” keeps in mind that journalism is made by reporters, and that some reporters, like some politicians or CEOs, are prone to scheming. If anything, the move into the digital age has made them crave applause and the celebrity status it can quickly confer.

On the subject of celebrity, there was once a time when being “Bond, James Bond” drove Scotsman Sean Connery crazy.

Weary of his purring, superstar status, and eager to take a break from 007 typecasting, Connery took time out to work with director Sidney Lumet on “The Hill” (1965), a devastatingly bleak story about outlaw British soldiers in a Libyan military prison during World War II.

Shooting in black and white to snuff glitz, Lumet zeroes in on Staff Sergeant Williams (Ian Bannen) and Regimental Sergeant Major Bert Wilson (Harry Andrews), both of whom degrade and humiliate their new charges for petty offenses. As metaphor, the movie is about the collapse of British order.

Connery is Joe Roberts, a demoted sergeant-major who refuses to capitulate to the abuse. His tenacity inspires increasingly vicious punishment and eventually a revolt. Connery’s rage to act outside the box is palpable and all the more gripping considering this film was released between “Goldfinger “and “Thunderball,” at the cool height of Bond-dom. It’s a must for Connery fans and boasts superb performances all around, including one prisoner played by the much-underrated Ossie Davis.