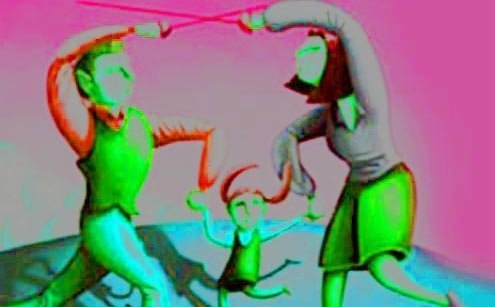 Stay in Italy? Return home? Give up. Or forge ahead?
Y

ou’ve discovered his extramarital affair and his pilfering of the bank account. He has lied to you with knowledge and intent, his doe eyes and a viper’s heart. You are an American woman married to an Italian who has lived in Italy for years, has two dual citizenship children, but with nearly-expired permesso di soggiorno (stay permit). Furious, stressed and vulnerable, you don’t know what to do.

From this point on, your journey will be highly personal. It will depend on your resources, legal status, family situation and most importantly your own plans and desires. Since you may not know that yet, what you need first is information.

Emily was in just such a position. Deeply depressed and confused, she sought therapy to sort out her priorities. Did she want her marriage or her independence, to stay in Italy or to return home, to give up or to forge ahead?

The therapist and conversations with friends led Emily to realize that she no longer had a support system in the United States. Her independent work in Italy had established a hard won beachhead. Her children were happy in school. She decided to stay.

Then came the many stumbling blocks of the Italian legal process.

She and her husband were married under the “separate property” regime. Their bank account, house and car were all in her husband’s name, and her permesso was based on her marriage to an Italian. She had no Italian driver’s license.

She realized she needed a lawyer to help deal with the complexities of the puzzle. She interviewed several, rejecting one who was critical of her and another who was morally judgmental, seeking to punish her husband. She finally chose one she intuitively sensed understood the situation and could give brass tacks advice.

Finances had to come first. Her husband had given her a delega (proxy) to use his bank account, but had the right to revoke it at any time. A joint account wouldn’t have been any better, since he would always have the option of withdrawing all the funds. Emily chose to open her own bank account. Her income would now be hers.

She then started proceedings to formalize the separation. After a three-year period, she could file a divorce petition to end the marriage.

Renewing her permesso was next. She learned that even divorce or the annulment of a marriage with a European Union citizen did not bring with it the loss of her permesso if she had either the right to permanent residence in Italy or met other legal conditions.

Permanent residency required five years of continuous residency. She had four, and wouldn’t qualify before the permesso expired. The other route was to show that she had work, either as a fulltime employee or through self-employment, or prove full economic independence. She’d also have to show proof of health insurance and that she met one of several possible conditions (length of marriage, child custody or visitation rights, or being the victim of a family related crime.)

Length of marriage proved to be Emily’s opening. Hers had lasted more than three years, at least one of which was spent in Italy before the start of divorce or annulment proceedings.

She could now renew her permesso. But since the nightmarish renewal process comes up every couple of years, she also decided to look into applying for Italian citizenship. Getting it would eliminate the need for a permesso.

Acquiring citizenship as a resident was possible, but as a non-EU citizen she needed 10 years of residency (the EU residency hurdle is only four years). Ironically, the only other category under which she could qualify for citizenship was through marriage to an Italian.

But there was a further hurdle. When the government issues a citizenship decree, the applicant cannot have entered into a divorce, have had his or her marriage annulled, or be legally separated from his or her spouse. Emily’s citizenship bid would have to wait.

Getting an Italian drivers’ license is notoriously difficult. But she found a driving school that would help prepare her for the test at the right price.

Then came the home, which the couple had bought before she understood Italian. Though it was only in her husband’s name, she had always paid half the mortgage. Having no ownership rights and no power to alter the situation, she discussed her rights with a notary. The notary asked to speak with her husband, who reluctantly came in. Prodded, he admitted that Emily had paid half the mortgage.

As an officer of the state, the notary reminded the husband that he would need to stand by that declaration in any divorce proceedings. Realizing his precarious position, the husband signed papers, prepared in advance by the notary, which transferred 50 percent of the house to Emily.

Emily was off the ropes. Now, after the fact, she’ll tell you there’s no underestimating the emotional and mental stamina needed to endure the three-year process. For those weighing marriage, she now advises a very careful look at Italian laws on marital property and legal status before the marriage or very early into it. Knowing what you want is fundamental. But what matters most is honesty, on both sides.