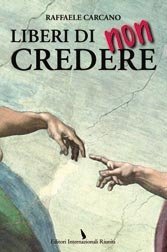 affaele Carcano, who heads the UAAR, Italy’s association of atheists, has written a vademecum on the current state of secularity in Italy. Here the reader will find no philosophical arguments for atheism, no attacks on religious belief or even a catalogue of indecent behavior by the Catholic Church and its hierarchy. Instead, Carcano guides the reader through the routine abuses of the rights of non-believing citizens: from the suppressed atheist bus campaign in Genoa to the Lautsi vs. Italy ruling that crucifixes in public classrooms are not in violation of freedom of conscience, the hand of the Vatican is never far from the puppet theater of Italian politics.

Secularism is on the rise, however. Non-affiliated Italians, according to a recent study cited, represent nearly 20 percent of the population and the number is growing. Compare that figure with the only two percent belonging to minority (non-Catholic) religions and you realize they represent a fair slice of the citizenry. Yet they have almost no voice or visibility. Moreover, their rights are trampled by such institutional perversions as the “8 per thousand” religious tax (income tax routed to the Church), Catholic religious teaching in public schools, and the ostentatious display of (exclusively) Catholic symbols in public spaces. Add to this the tendency of Italian media to pander to the Catholic Church and report every grunt and groan of its leaders uncritically.

Then comes the political class, to which the author devotes two full chapters, serving up an analysis of the near-total abandonment of secular causes to which few politicians — right or left — give more than lip service. In fact, the Democratic Party takes the brunt of the criticism for being practically the only center-left party in Europe that doesn’t lift a finger to advance a secular agenda. The only parliamentarian noted for her devotion to secular causes is Emma Bonino, who was shot from both sides during her 2010 campaign for the governorship of Lazio.

The Italian situation is contextualized throughout the book with reference to the European Union and the United States, even going back to ancient times (the first recorded book burning, according to Carcano, was of the “impious” Greek author Protagoras). The tone is sober, but not without the appropriate irony. The reader comes away with the impression that Italy is less a modern secular nation than a kind of milquetoast theocracy. Non-believers may no longer be tortured or burned for their impiety, true, but they are consciously marginalized and proselytized to by a cynical political class and their hubristic clerical bedfellows. Which, one might add, is nothing to be proud of in the 21st century.