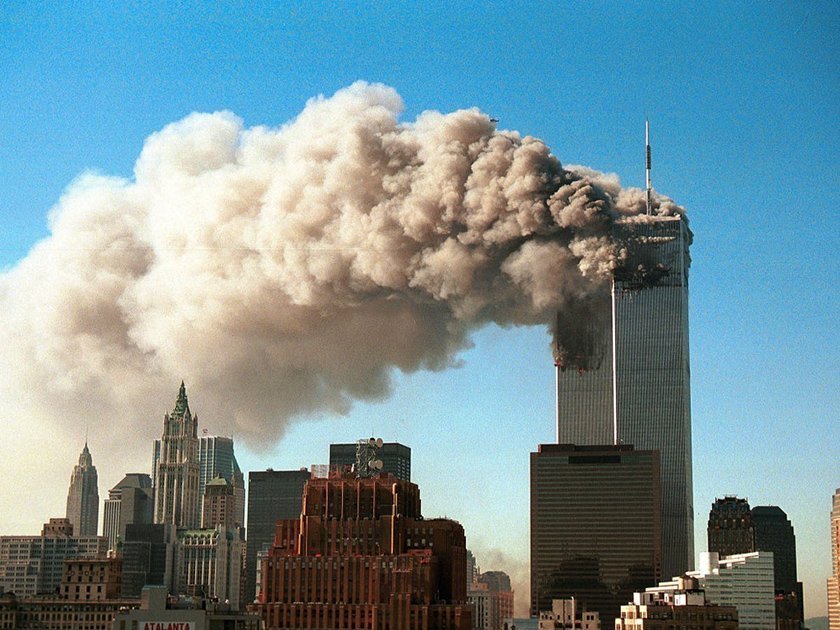 Safe, safe, safe.... or something terrible will happen.
I

t began with relentlessly recycled footage of a hijacked commercial jet slamming into a New York City skyscraper, followed by a second jet and people leaping from upper floor windows, after which came the unthinkable sight of the two towers collapsing. Adults dissipated into terrified children. The American government started using crayon colors to designate threat levels while television producers, mindful of the of tower footage impact, began recycling the worst of any terrorist attack images that came their way.

In a breathtakingly ironic turn of events, terrorism’s “be very afraid” mantra has shifted to the virus, with liberals now eager to play a revised version of the safety and security card at Trump’s expense.

Repelling terrorism would take decades, leaders said, and the crisis was an all but permanent one – as if to mimic Leon Trotsky’s concept of “permanent revolution.”

Reprisal wars started in Iraq and Afghanistan were explained in the name of national security and public safety.

Crayon-colored thinking prevailed at all levels. Those who acknowledged the peril were patriots, opponents labeled appeasers.

The tone of the seven years between the 2001 attacks and Barack Obama’s election were set by conservative hawks who cited domestic safety as their underlying goal. The Arab Spring of 2011 and the Syrian civil war that followed only boosted terrorism with often indiscriminate violence, producing streams of refugees, seen by some as intrinsically dangerous.

Obama’s two- term tenure, which began in 2008, seemed briefly to restrain the red-crayon mood but did nothing to quell hardened zealots convinced the country’s first black president was a closet Muslim radical.

Partisan divisions deepened in both the U.S. and Europe, with surges among populists who insisted they wished only to keep their populations safe.

Donald Trump’s unexpected election, a severe admonishment to traditional politicians, gave an impetuous and unpredictable man a chance to do things his way, in black and white only, personal allegiance mattering above all else.

Humiliated liberals at first responded with little cohesion, only gradually starting to chip away at Trump’s Nero-like behavior.

He became, to Democrats, a threat in his own right. But for three years they seemed to preach only to their own choir. In January, Trump’s re-election chances looked strong.

Cometh the corona virus, for liberals a perverse bit of political providence.

Early on, Trump had trivialized the virus and mocked his own medical officials. As the contagion spread, liberals seized the high ground by playing to red-crayon themes bolstered by death and infection rates. Trump seemed suddenly at a loss and typically blamed bad tidings on others.

By the time he conceded the virus posed a threat, the latest planes had already struck the latest towers. The literal and symbolic flames fanned after the George Floyd murder underlined a now generalized sense of insecurity.

Just as conservatives rode the back of terrorism, liberals hitched a ride with the virus and applied anti-terrorist style militancy to Trump’s shortcomings while applying their loyalty to science and data with weapons of mass destruction in Iraq-verve.

The new appeasers were those who minimized the threat or promoted mass immunity strategies.

This has been a breathtakingly ironic turn of events in which terrorism’s “be very afraid” mantra has shifted to the virus in a matter of months, with liberals now eager to play a revised version of the safety and security card at Trump’s expense.

The disease became the axis of evil with dedicated but undermined health officials playing the role of New York City firefighters.

Liberals paid no mind to debate within the medical community over how best to control the virus, just as the Bush Administration pushed aside those skeptical of Saddam’s arsenal of weapons of mass destruction.

With a bogeyman added to the pitch, and the tender is yours to lose.

Should a Democrat take office expect new and sweeping virus restrictions. Some will applaud, others will vilify. A Democratic president will also, and sadly, be condemned to the wrath of those who will return to seeing Washington as a caliphate. In fairness, this rage boiled over during the Bush era’s red-crayon stretch and grew white-hot in the Tea Party days that followed. Trump unabashedly played to the state’s rights crowd by allowing governors to tailor their own anti-virus strategies. It’s unclear how some states, many stricken with unemployment, will respond to federal directives after a year of autonomy.

There exists a Gothic fable about a farmer who facing the certain death of his animals in a plague year set his barn on fire as an act of mercy. Pushing for safety can lead to missteps if not madness, witness the brilliant men, Democrats all, who engineered the Vietnam War. Those who follow Nero will need to tread cautiously.