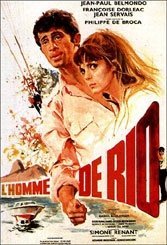 French director Philippe de Broca didn’t need James Bond to get him wound up. He already had a young Jean-Paul Belmondo and a destination that 007 never found particularly comfortable: Rio. His black-and-white spy spoof is fun to watch because Belmondo is fresh and springy (often on the run) and de Broca’s eerie shots of Brasilia make the creation of Brazil’s then-phantasmagoric capital all the more surreal.

Bad guys steal a pre-Colombian relic from a Paris museum, abducting an authority on the period. They then kidnap Agnès (Françoise Dorléac, Catherine Deneuve’s sister), who they believe has two more of the precious figurines, and trundle her off to Rio, hoping she’ll cough up treasure map details.

What they don’t count on is Adrien (Belmondo), her airman boyfriend back on a one week furlough. Off dashes Adrien on a Brazilian trek (Rio, the Amazon forest, and Oscar Niemeyer’s incipient Brasilia) to get her back, dodging gangland gunfire and wisecracking. While Alain Delon incarnated handsome male melancholy, Belmondo pumped out brio. Belmondo’s dashing amid unfinished skyscrapers in the middle of the Amazon heartland is part of the film’s quirky charm.

“The undeniable charm of many bad movies,” wrote critic Andrew Sarris of “Rio,” “is their gallant but futile striving to be good.” But just how “good” De Broca ever intended “Rio” to be is open question. It’s silly, hokey, funny, and pretty, with Belmondo in his frenetically attractive, all-in-a-week’s work prime. If the film proved that the growing action genre could be spoofed, it also proved ant such effort ran the risk of becoming what it caricatures. There’s a bit of both here. The promising Dorléac, 22 at the time, died three years later in a car crash.