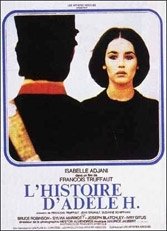 Before unrequited love was strangled into criminal format — namely the stalker movie — the perils of crazy love attracted more subtle shadings. French director François Truffaut (1932-1984), who had taken a two-year sabbatical from movie-making that included a reading of the 19th-century diaries of Adèle Hugo, Victor Hugo’s second daughter, returned to the screen with this story of a woman who responds to the shocking death of her elder sister by slipping into a lifelong love trace.

On the murky channel island of Guernsey, teenaged Adèle (Isabelle Adjani) falls into irrational, unrequited love with a British lieutenant named Albert Pinson (Bruce Robinson). When Pinson is dispatched to Nova Scotia, Adèle secretly follows him, taking on an assumed name and assuring her parents that she’s married him. It’s all a charade, but a life-shattering one. Convinced she’s his and his alone, Adèle disrupts Pinson’s Halifax life — ignoring his direct pleas — and does so again, later, in the West Indies, this time posing openly as Mrs. Pinson. Time and again she ignores her own peril, her “beloved’s” reason, and invites humiliation she’s incapable of witnessing.

Truffaut was remarkably fortunate to find and cast Algerian-French actress Adjani, who was only 19 at the time. Among the most beautiful women actresses in French film history, Adjani early on demonstrated an uncanny ability to transmit a trance-like affect that, using beauty as willpower, transcends the actual around her. She perfectly rendered Truffaut’s fascination with the power of loss and the “truth” of delusion. Adèle is by far Traffaut’s most lyric work, a mesmerizing tone poem whose premise defeats happy endings and makes one-way lust into hard work and eventually transforms it into an affliction. What begins in thrall ends in madness.