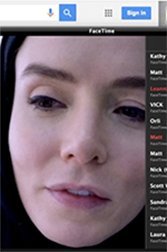 What do missing-child thriller “Searching,” supernatural franchise “Unfriended,” and Timur Bekmambetov’s chilling terrorism story “Profile” have in common? They’re all set entirely on computer or smartphone screens as part of a new film language known as “screen life.”

“Profile,” based on a French journalist’s investigation into the recruitment of young women by ISIS, seems at first unbelievable. We hear about vulnerable, disenfranchised youth being drawn to terrorism, but the idea of a responsible adult journalist becoming personally involved with the terrorists she’s investigating through video contact borders on the ludicrous. To Bekmambetov’s credit, the unfurling onscreen action never feels contrived. On the contrary, the extreme circumstances only add to the tension that ripples through the length of this remarkable film.

The majority of the action takes place on Skype calls between journalist Amy (Valene Kane) and ISIS fighter Bilel (Shazad Latif). Bilel couldn’t be further from the aggressive terrorist stereotype that has dominated films and TV programming since September 11. Bilel is a charming, well-balanced young man who has every right to be angry at the system he grew up in and is now rebelling against. It’s hard not to feel guilt for finding this character likable. His endearing smile alone all but guarantees this empathy. The set-up is a stroke of genius.

Whether the “screen life” movement reflects a fad or something more enduring remains a question mark. For now, it’s adding an element of realism to thrillers, making the genre that much more riveting.

The online world is morally ambiguous and people generally more comfortable in stepping out of their accustomed comfort zones, sometimes to a striking extent. As a result, almost any character can seem plausible.

Would the video conversations between Amy and Bilel feel realistic if conducted face-to-face? Probably not. But what’s important is that directors continue to push the boundaries of genre filmmaking. Here’s hoping Bekmambetov continues to move his style forward in interesting ways and encourages others to do the same.

The story itself draws heavily from French journalist Anna Erelle’s 2015 book “In the Skin of a Jihadist,” which was based on her own experiences, she called herself “Melodie,” with a French-born ISIS member also named Bilel.