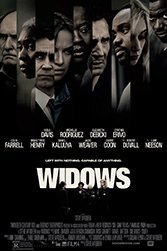 English director Steve McQueen goes for something entirely different in “Widows.” The video artist turned acclaimed filmmaker is best known for his heartbreaking portrayals of men in crisis, whether it be a brutal hunger strike (“Hunger,” based on the IRA’s Bobby Sands), sex addiction (“Shame”) or slavery (“12 Years a Slave”). This time around, McQueen not only reverses his gender emphasis but also tries to make a traditionally entertaining and less emotionally draining film. The result is a heist thriller.

The movie opens with a literal bang, as we see Liam Neeson and his gang of criminals blown up after a heist goes awry. With them, goes $2 million in cash owed to mayoral candidate and crime boss Jamal Manning (Brian Tyree Henry), who approaches Neeson’s widow (Viola Davis) about repayment. To raise the funds, Davis recruits the widows of Neeson’s associates to undertake a new heist, for which Neeson left blueprints behind.

It’s the pedigree of the large cast that will catch many eyes, and the performances are impressive across the board. Davis is sturdy as heartbroken but assertive Veronica, but Elizabeth Debicki stands out as the youngest of the wives, and the one with the most to prove. Debicki’s towering height added dominance and assertiveness to her excellent turn in “The Tale.” Here, her slim elegance gives her a more vulnerable feel, as if she would snap in half at a touch.

It’s in the small details that McQueen leaves his mark. Every shot and sliver of dialogue is precise. One conversation between two characters is filmed entirely from outside and above the car they’re in, adding focus to the conversation but also conveying an element of voyeurism, as if we’re eavesdropping on the kind of sordid chat the powerful engage in when not trying to win anybody’s favor. These kinds of subtle decisions prove just how attentive a director McQueen is.

Some characters are given more screen time than strictly necessary, most notably Colin Farrell as Manning’s mayoral competitor. Again, though, the dialogue is so engaging you almost don’t notice. This isn’t like McQueen’s previous efforts. No new ground is broken. No one will leave spellbound. Instead, it’s impressive and admirable all the way through, further solidifying McQueen’s reputation as an exemplary filmmaker, not such a bad thing at all.