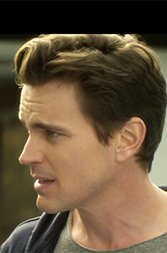 Matt Bomer has used his clean-cut handsomeness to great effect before, most notably in the “Magic Mike” series in which he played Ken, a stripper aiming to prove there’s more to him than his pristine looks. It’s in director John Butler’s excellent “Papi Chulo,” though, that Bomer is gifted the role of his career, as an enthusiastic TV weatherman whose life is torn asunder by the ending of a long-term relationship.

At first, Bomer’s Sean feels like a Los Angeles stereotype, more eligible for ridicule than sympathy. His tan is blinding and he spends his days hiking and buying expensive health foods. Sean is remote from the world, but not out of malice. When he hires Mexican laborer Ernesto (Alejandro Patino) to paint his balcony, Sean sees not only an opportunity to invest himself in the life of someone outside his usual social circle, but also to fill the gaping void left by his former partner.

What follows is a sensitive comedy of manners. Sean continues paying Ernesto to “work,” which in reality involves accompanying Sean on tasks he would previously have done with his ex (rowing on a lake, attending fashionable Hollywood parties, and so on.)

Ernesto is bemused by the situation but remains happy to take receive payment. More importantly, he senses something in Sean is broken. Despite barriers of language, age and class, Ernesto knows what it means to lose someone close to you. Only when Sean’s behavior turns romantic does Ernesto flee.

What begins as a critique of Hollywood’s bubble gradually morphs into a genuine heartbreaker. Sean is fragile but not weak, struggling to navigate the life he and his partner created together. Bomer saves Sean from parody, infusing a troubled character with underlying strength. Patino also excels, especially since he must transmit his empathy towards Bomer almost exclusively through facial expressions.

It will be fascinating to track Bomer’s career from here, because his personality as a performer has so intrinsically belonged to characters trying to prove they’re more than skin deep. Here, he does just that.