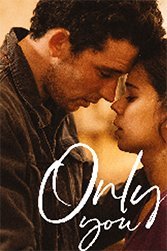 The “Only You” poster shows leads Laia Costa and Josh O’Connor with their foreheads pressed together, O’Connor’s eyes open just enough to convey a loving gaze. Given this image and the film’s title, you’d be forgiven for assuming this is a story about unbreakable intimacy between the starring couple.

In fact, writer-director Harry Wootliff’s debut is a heartfelt but wearisomely dark drama about the breakdown of a once intense relationship.

After a tipsy meeting on New Year’s Eve, Jake (O’Connor) and Elena (Costa) jump straight into a serious relationship. Within a few months they’ve decided to start a family. Problems arise when Elena discovers her chances of conceiving naturally are slim.

O’Connor and Costa, both coming off recent breakout performances, imbue their characters with passion enough to give their love a believable chemistry notwithstanding how quickly it develops. Unfortunately, the characters spend most of the film in quiet turmoil over their situation. It doesn’t take long before they turn on each other. It’s unfortunate Wootliff doesn’t allow us to bathe in the couple’s affection for longer.

Also frustrating is the couple’s obliviousness to adoption or surrogacy as options. Elena spends 90 minutes lamenting the possibility of being unable to bear a child without a single mention of alternative options. If it’s an oversight, it’s a bizarre one.

Age also gets odd treatment. At the start, it’s established that Elena is 35. But it turns out she’s lied. Later, she’s asked by a friend if Josh minds that he’s dating “an older woman,” though the difference between them is less than 10 years. The relevance in terms of childbearing is obvious. Yet the age-gap obsession feels somehow outdated. Dating patterns no longer follow traditional rules.

Though Wootliff tackles an oft-ignored subject with care and good intentions, the result is a rough-edged film that too often lacks self-awareness when it matters most.