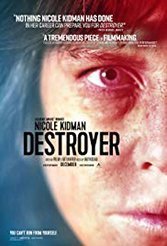 You’d be hard-pressed to find a more perfectly clichéd premise than that of director Karyn Kusama’s “Destroyer.” Nicole Kidman plays Erin Bell, an undercover cop who does things her way. But guess what, she also has a drinking problem! She’s haunted by her past! She puts work ahead of family! It’s as if you took every American crime show of the past three decades, put all their plot ingredients in a bowl, and stirred the whole into a fine paste. It’s fortunate then that Kidman is on top form, bringing some respectability to the tired, outdated story of an investigator chasing past traumas.

The first thing you’ll notice on seeing Kidman is her makeup. Grey hair and a face to match, with under-eye bags so deep she seems almost skeletal. Face-transforming makeup can often be a distraction but here it adds necessary depth and sadness to the character. In flashbacks we see Kidman looking youthful and radiant, a determined young officer who would do anything to impress. Early on, the details of Erin’s past are kept vague. Later on, the severity of her inner turbulence becomes obvious. Only a life-changing event could have produced such a transformation, and time is taken to reveal what exactly that was. This plot progression rewards the kind of patience the film may not have the dynamism to earn.

Intriguingly though, it is the storyline between Erin and her 16-year-old daughter Shelby that weighs things down. Despite the many flashbacks, the script never delves into the genesis of their antagonistic relationship, making it difficult to sympathize with either mother or daughter. These blood ties play unevenly ahead of Erin’s more urgent struggles.

Director Kusama, a TV veteran, does a fine job with what she’s given — separate bank robbery sequences are directed with real verve and may keep interest up where the script flounders. But this simply isn’t the most thrilling crime drama you’ve ever seen, and the accomplished direction and Kidman’s lived-in lead performance can only advance it so far.