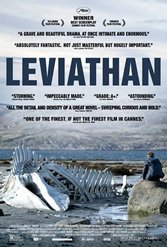 In Andrey Zvyagintsev’s deliberate and affecting tragedy, Kolya (Aleksei Serebryakovis) is a small-town handyman near Artic Murmansk who’s lives in a modest house by the sea he built from the ground up for his wife Lilia (Elena Lyadova) and Roma, his son from his first wife, who died. His future is in immediate peril as the town’s corrupt mayor seeks evict him and use the land for his own moneymaking ends. Kolya pins his hopes on Moscow lawyer and friend Dmitri (Vladimir Vdovichenkov), who for a time shrewdly turns the tables on the mayor. That will change.

But life doesn’t stop for a feud, however raw. Cannery worker Lilia is restless and grows close to Dmitri. Teen son Roma is disoriented and enraged, increasingly resistant to stepmother Lilia. This is Russian fatalism at its best: meticulous, vodka-fueled, and systematically drained of joy to give real and symbolic expressions of human venality full expression. A beach strewn with the giant skeleton of a whale is metaphor enough for the various dead endings that plague the actions of the mere mortals, whether noble or corrupt. Like most small town morality tales, Zvyagintsev uses a family to portray a society whose most vaunted values — religious ones foremost — are fissured. Grip on life, love and prosperity is tenuous. Tragedy lurks like the plague. God refuses to pronounce himself (Zvyagintsev is no fan of the organized Russian Orthodox Church, praising only common priests). Lawyers cannot understand the purpose of morality, and court sentences are read aloud to sound like advertising small print. Men tap emotion through drink alone.

In all this, honorable Kolya is a latter-day Job, though waging a losing battle. A Leviathan-like apparition does appear in the final minutes, but it is a wrecking crane branded Volvo. A masterful, painful, and slow indictment of Russian life that happened to be made under Vladimir Putin, but in tone and theme transcends the comings and goings of regimes.