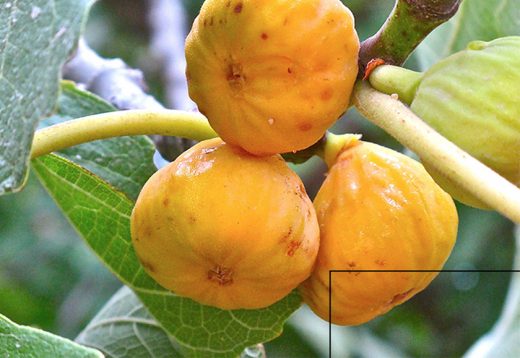 ver the years I’ve had an antidote to the garden sparseness that comes over southern France in November.

My secret to being prepared was a huge fig tree up a perpetually deserted, winding road which seemed, for as long as I’d walked it, to belong to no one. The figs this tree offered would crop up in late summer, and in early October I’d look forward to picking these ripe and plump yellow bonbons, their sugary skins about to burst.
But this year brought a surprise. Dreams of tarts already in mind, a friend and I took an afternoon stroll to the tree, Tupperwares in hand. Along the way we picked the wild fennel flowers whose scent would contribute to our delicious fresh fig tart.

But as I was about to harvest my jewels, an elderly man appeared from a gate about 20 meters away, immediately demanding to know why we were stealing all his figs.

An elderly man appeared, demanding to know why we were stealing all his figs.

I didn’t like that word, not a bit, since in these parts the fig trees that grow in the wild along roads and paths have always been fair game, even to the most wicked of thieves.

Though the roots of this tree were indeed on the hill of a terraced vineyard, that same hill was unweeded and overgrown. I’d also been doing what I was doing that day for 15 years. There had been no complaints. In fact, no one had ever come out of the rental house nearby, which had always looked empty. There wasn’t a “trespasser’s beware” sign in sight.

Still, I tried looking as guilty and sheepish as any caught fig-stealer should, and immediately expressed my regret. I promised to cease and desist (we already had six figs and there were hundreds on the branches). I pointed out he still had plenty to choose from, and that we’d only come to get a handful, to remind us of summer’s end. This didn’t help much since he seemed convinced we’d already overstepped by picking what we had in hand.

Sensing this, I smiled my best fig-thief smile and said, “Listen, I have an Amalfi lemon tree from which I harvest a couple of hundred seedless, perfect fruits in winter. Would you like a few when they’re ready, to compensate you for our six figs?”

No reaction, none at all, just an angry, grumpy glance at each of us and a concentrated stare as he watched us leave the property he alleged was his (we have no proof of this).

I then went a step further.

“You know, the ones that overhang this public path are up for grabs, right?  They actually do not belong to you.”
This he clearly did not wish to hear and reminded us of his previous suggestion that we leave, tout de suite.

We live in a sweet little village where people share and offer to help. This man most definitely didn’t fit any local mold we knew. When you live in a neighborly environment, exceptions to the rule stand out.

It’s no wonder, I thought to myself, that he lives in the most isolated house in our vicinity. Maybe he suffered a reversal or a loss. Maybe he’s ill. My list of “maybes” was long.

I’ve always liked to think that a human being like this man must be innately unhappy, or that from time to time he just wakes up on the wrong side of the tree.

The showdown at the fig corral reminded me of when we built our first house (long ago, the property came with a lovely lemon tree on one of its terraces). On my first morning after moving in, I saw a young woman picking our lemons. I admit it ruffled my feathers. I approached her and said, “We live here now, and this is our tree.” I was as polite as possible.

I’ve always liked to think that a human being like this man must be innately unhappy.

“But I’ve always picked these lemons,” she responded. “There was no one on the property.”

I told her she could come by when the lemons were ready and I’d be happy to share, as there were hundreds on the tree each year.

But she gave me a look very likely similar to the one I gave the irate fig man. She had always done it, as I had. She didn’t want to hear about change.

My friend and I looked at the isolated house every night we got the chance, just to see if the lights were out and he was gone. We had plans for those figs.

But over time, and not much time at that, we surprisingly lost our impetus to return. A damper had been thrown over our frolicking joy, and we knew it. We had no desire to return to the messy crime scene. There was no picking up where we’d left off. The picking was over.

If we had just been able to barter with the poor guy, I’m sure I could have persuaded him to trade figs for lemons. Maybe then we could have shared homemade limoncello. Maybe would could even have become friends. Maybe he would have enjoyed my fig tarts.

Maybe. Or maybe not.

To me, compromise, which includes conversation, is always worth a try. These days, though, it doesn’t seem to be in fashion.

After our brush with crimes and misdemeanors, I remembered there was another laden fig tree a little bit further up the hill on property I knew to be abandoned.  The only inhabitants were a few lizards, some ants, and the usual birdies.

That settled it: the time had come to give up on the grouch and let sleeping figs lie.