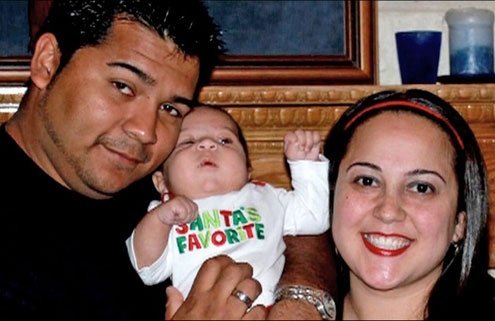 Marise Muñoz was pregnant with her second child when she collapsed in November.
T

he script for Evelyn’s death couldn’t have been better prepared. My wife’s 90-year-old mother suffered a stroke three days before Christmas and the holiday allowed her four daughters and their families the time to gather around her during her final days. There was no place any of us would have rather been.

The end played out in a far darker way for 33-year-old Marlise Muñoz, who was 14-weeks pregnant when she collapsed suddenly in her kitchen. Pronounced brain dead by Fort Worth, Texas doctors in November, she was kept on life support when John Peter Smith Hospital administrators decided to apply the letter of Texas law: “A person may not withdraw or withhold life-sustaining treatment … from a pregnant patient.”

Muñoz was removed from life support more than two months later, on January 26, after a state court ruled she was legally dead and held that her pregnancy, and the law, was irrelevant, ending what had become a very public ordeal.

Though Muñoz’s husband insisted his wife always disliked the idea of life support, she lacked a Health Care Declaration and Proxy, known as a “living will” — a document that can call off the use of hydration and nutrients in the event of a catastrophic event. But even with a living will it’s highly unlikely John Peter Smith Hospital would have set aside its interpretation of Texas law.

I have previously written about Terry Schiavo in Florida and Eluana Englaro in Italy, two women in vegetative states who were kept on life support for 15 and 17 years, respectively, as courts tried to sort out their wishes regarding end-of-life care.

Those cases — although Italian law still doesn’t recognize living wills — demonstrated the extent to which an individual’s written wishes can save families and the medical and judicial systems untold time, money and anguish.

But the Muñoz story cuts deeper and begs tougher questions. For example: should a society’s laws override the wishes of a woman in a vegetative state when the woman’s decision about the last phase of her life was made before she became pregnant? Right-to-die laws reflect the cultural environment in which they are drawn up. Moral, ethical, religious and scientific mores all come into play.

Italy, which hosts the seat of the Roman Catholic Church, permits an individual to refuse “medical treatment.” The Englaro court defined her life support as a form of medical treatment. Once her wishes to dispense with such support were legally proven, it was terminated. But that right has yet to be legally tested on a pregnant woman.

In the United States, the dilemma plays out on a state-by-state basis under the watchful eye of the Supreme Court.

I turned to my godson, Father Mathew Kozlowski, an Episcopal priest, for his thoughts on the matter. Theologically, he told me, only God has the right to take a life. “Pulling the plug” on life support, was not, he said, taking a life, but instead placing that life in the hands of God to allow God to “take life.”

But in biblical terms, he added, a society is judged by how it looks after its most vulnerable, and “the unborn fetus is perhaps the most vulnerable life imaginable.” Thus the Muñoz case created what he called a “perfect ethical storm.”

In his lecture series “Justice,” Harvard political philosopher Michael Sandel has suggested that the fundamental question isn’t how to weigh the best outcome of an event (including human life) based on the relevant facts, but to consider instead if certain human rights — whether dubbed natural, sacred or inalienable — are so fundamental that they rise above any factual calculation.

In 1928, Supreme Court Justice Louis Brandeis articulated the concept of a right to privacy (already a fervent legal debate) in a dissenting opinion: “The makers of our Constitution sought to protect Americans in their beliefs, their emotions and their sensations. They conferred, as against the Government, the right to be left alone…”

Section 1 of the Fourteenth Amendment reads: “No State shall … deprive any person of life, liberty, or property, without due process of law; nor deny to any person within its jurisdiction the equal protection of the laws.” In 1990, the Court, in non-binding language, tied the Amendment to a patient’s right to refuse life support — if those wishes could be demonstrated through clear and convincing evidence.

Due process and equal protection under the law allow all Americans the right to resist government battery, which also includes the right to refuse medical treatment — even if that treatment stands to benefit another. No one is forced to give blood during life just is no one is compelled to give organs at death. Pregnancy should not alter those rights.

A life, whatever its duration, deserves the dignity to be commemorated for what it was, and the privacy and wishes of the individual respected. When Evelyn died, in that intimate moment, we felt a profound loss. Yet we celebrated her life and we were relieved she didn’t suffer.

Marlise Muñoz deserved every right to the same.