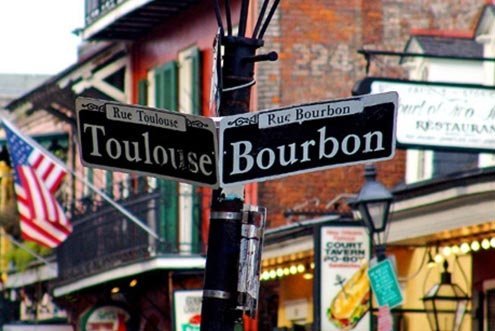 On to Iberville Street and the fortuneteller.
M

y mom kept her hands on the table, palms up, as a seemingly distracted woman told her fortune in a vaguely accented voice. The woman touched her hands, examined them closely, then looked away, out the wide door frame onto Iberville Street in New Orleans’ French Quarter.

It was late, the weekend before Mardi Gras, and revelers passed by laughing gaily. But inside the narrow hallway of a shop I felt an eerie snowed-in silence over the five of us, my mom, the teller, Luli, her mom, and me.

My thoughts slipped back to an early afternoon three years before in my northern Michigan cabin, a dark and snowy day when the snow fell in nickel-sized chunks, the wind whistled down the chimney flue, and Luli and I sat around the long wooden kitchen table preparing dough for beignets. Meanwhile, my uncle stood at the counter injecting jelly into paczkis (pronounced punchkies).

The storm had trapped us, and my uncle decided to add to the already doughy day by teaching us the family baguette recipe. We kneaded and stretched the glutinous dough, set it to rise, and put a tray of water underneath to ensure a crisp crust.

The paczkis, in turn, were a Mardi Gras must from my mom’s side of the family, whose surname — Czajka — is reminiscent of the Polish doughnut in both spelling and difficulty of pronunciation.

“This is my last hurrah,” said my uncle nostalgically, popping every third jelly-filled paczki in his mouth. Doctors had told him he had celiac disease.

After those very paczkis, he gave up gluten for good. If flour’s floating in the air, he won’t go near the kitchen. I was blessed. The long, snowy drive had led me to his final baking lesson.

It was a weekend of symbols and turning points. “After 25 years, this is my last spring break,” said Luli, looking out at the snow. “Remember undergrad spring breaks, the beaches, the cocktails? It’s all so different now… We bake on spring break! I feel like we’re so grown up.”

I felt grown up too. After five years in Rome, I’d just moved back home and Michigan had welcomed me with the season’s worst winter storm.

The first morning at my cottage I scoured barn boxes looking for a decent coat. The boxes contained items from a past life packed up from my Chicago apartment before I boarded a plane to Italy. They hadn’t been opened in five years. As I searched, I marveled at the ingenuousness, the shyness, and the childishness of the girl who’d owned these things. I finally found a coat and pulled it on anxiously, shutting up the boxes and deciding to leave them there for another five years, or maybe forever, together with all of that distant girl’s memories.

During the storm, Luli and I smoked cigarettes under the eaves of the A-frame log cabin. We synched our hoods to keep the wind from whipping our hair and lashing it around our smoldering faces. “Do you ever think you’ll get married?” I asked her.

“I will,” I said after a pause, “I was meant to be with one person forever.”

“I want a guy who makes me laugh,” she said, waiting on me.

“I want a guy who makes me laugh and laughs at my jokes.”

Now I was in Louisiana for another Mardi Gras, a trip I’d promised to make over beignets and coffee three years before. The day I arrived, Luli asked me to take her baguettes out of the oven while she was at work. The smell of warm bread filled her Baton Rouge apartment and when I opened the oven door I saw a water tray under her bread pan, the baguettes crunching to the touch as I pulled them out.

The next morning at 5:30 a.m. I’d heard her laughing, as she and her boyfriend got ready for work. “She found the guy who can make her laugh before dawn,” I thought happily.

I was suddenly aware the fortuneteller had fixed me with an ominous gaze, pulling me hard and fast out from my reveries. I stared back at her hesitantly from behind my black and gold Venetian mask.

“This is your daughter,” she said to my mom.

“You will have two children, twins, a boy and a girl,” she told me. “You have been hurt very badly, but you need to forget it. You need to learn to trust again, to move on. It is time.”

I hurried out of the fortuneteller’s shop. Marriage, I thought? Twins? But I’ve never wanted children.

Maybe I could just keep holding on to the distant girl. Or maybe, one day, I’ll go back to the barn and unpack those boxes for good, and let that girl go.