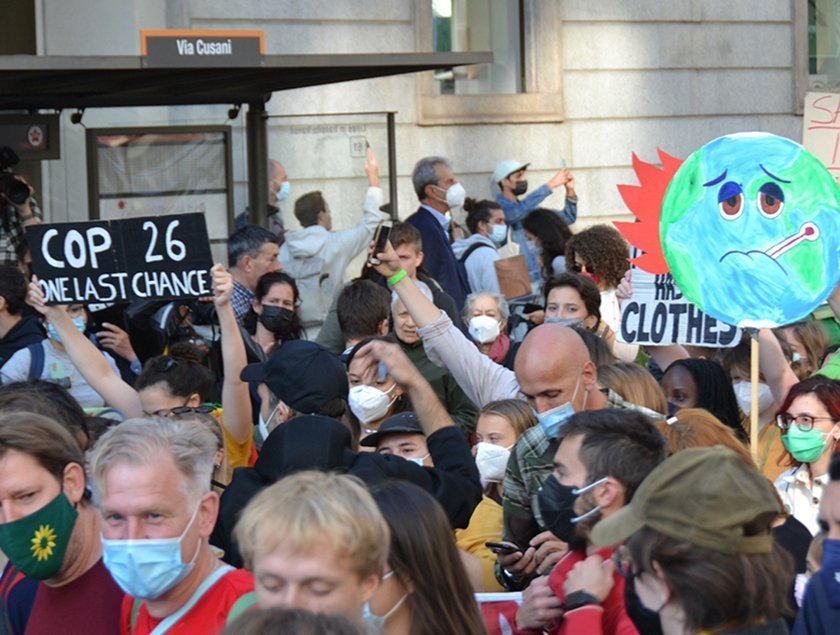 n October, I was finally able to return to Milan, where I lived for almost thirty years. I had not visited since 2018 — the year I returned to the United States and settled in rural New Hampshire. I had no idea what to expect after the pandemic.

Though it seems like decades, it was less than two years ago that the coronavirus made its landfall in north Italy. As the viral storm ripped through places and people all too familiar to me, I followed events from the U.S. My Italian friends and I bristled at smug American predictions that Italians would never organize a coherent defense. Since Italians were Italians, their disorganization was guaranteed to plunge the country into chaos and let the plague spread around the world.

At the time, Americans congratulated themselves. They had the science, the medical know-how, and the social self-control necessary both to protect themselves and show the rest of the world how pandemic protection is done.

Well, as not only Italy but the planet knows by now, that’s not how it worked out.

In traveling to Italy this October, I left behind a confused and divided America that has yet to deal with the pandemic in some unified way. For a few weeks, I would be free of seeing every new scrap of information twist America into knots of rhetoric and fear. For a few weeks, I would not have to listen while my country’s armchair virologists readily let facts and opinions blend.

While in Italy, I could tune out Americans who placed personal preferences ahead of both the public good and simple common sense.

While there is debate over how the virus is being handled in Italy — two loud anti-vaccination rallies were staged during my stay in Milan — it is muffled by widespread and drama-free compliance with public health measures. The Milanese I saw were getting back to day-to-day business. Not only were masks ever-present, the Milanese raised and wore masks whenever entering coffee bars, shops or homes. Likewise, they displayed their “Green Passes,” digital vaccination certificates issued by Italy’s health ministry, whenever called for.

The flow of traffic, train stations, and Milan’s metro stops all had carefully marked lanes to ensure distancing. Italy’s traditional adherence to Mediterranean notions of personal space — be close, stay close, make things crowded — is now positively Nordic. In restaurants, patrons wore masks to enter or move around, but lowered them when seated at tables.

It was surprisingly easy to convert my CDC card into an Italian Green Pass (which is also valid throughout the European Union). Soon I was able to get an all-clear QR code on my phone. This scan code is used by shops, restaurants, museums, and trains. It was reassuring that whenever I had coffee, entered a shop or took the train, everyone around me was either vaccinated, had sufficient antibodies, or a recent negative test.

Italians often make a distinction between what they see as the European love of theory and predisposition for intellectual approaches and Anglo-Saxon pragmatism. But my daily interactions over two weeks in Italy showed the reverse. Debate aside, Italy has focused its energy on finding practical solutions.

Let’s compare this to America’s patchwork of regulations and low-tech certification. Until I received my own Italian Green Pass, I used my CDC vaccination certificate. The Italians who verified it looked at me with a kind of superior pity when I explained that the cardboard CDC card, stickers included, was American.

Despite heavy Italian losses to the virus in 2020 (particularly among the elderly), and the economic downturn that resulted from work paralysis, Italy’s overall mood is now upbeat. The country’s drastic lockdowns helped, as did its vaccination campaign. In October 2021, virus cases dropped almost as fast as they had risen in the spring.

The self-discipline Italians displayed in the worst of times has paid dividends.  Morale has boosted. Italy’s strength and restraint surprised many, and should there be another surge, Italy now knows the adversary and has the confidence to face it down.

I have never seen Italy this confident before. Usually seen as Europe’s underachiever, Italians can afford to preen a bit.

Italians are also proud of Mario Draghi, their prime minister, who is deeply respected in the EU for his experience and credentials (he headed the European Central Bank and guided it through hard times). His leadership commands acknowledgement, both at home and among key EU states.

Nevertheless, the cost of beating back the pandemic has been high. It saddened me to see that several of my favorite Milan shops, especially older institutions, have closed. Still, my week-and-a-half in Milan was a rich time, crammed with more aperitivi and dinners than I’d managed over the past few years. Milan’s competitively priced private clinics also allowed me to have a battery of checkups and tests at a fraction of the cost had I opted for them in America. My old primary care doctor had retired, but she saw me privately (and refused payment).

Like meeting up with an old boyfriend, I worried that returning to Milan would dredge up conflicting feelings. I was afraid I might discover that moving away had been a mistake. But as the days wore on, I began yearning for my quiet lakeside life in New Hampshire. Despite everything, I was ready to return to my routine, to my admittedly imperfect nation, to go home.