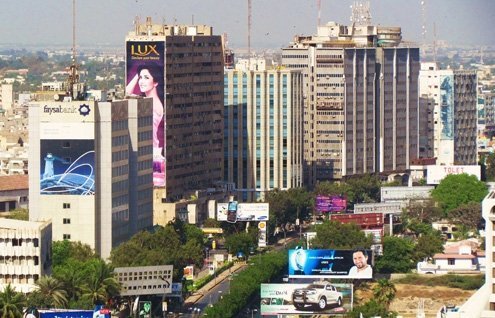 Karachi, with a population of nearly 24 million, is the seventh largest city in the world.
I

recently returned from a trip to Pakistan. Before I left, worried friends wondered why I would visit a country they thought ranked with Somalia for appeal — hot, dangerous and anti-American.

True, Karachi is no one’s idea of a beauty spot and the daily crime map of the Karachi Express Tribune is full of red flags. Power supply wobbles, drinking water is dodgy and traffic is Third World chaotic.

Pakistan may be a PR nightmare of a country, but it defies preconceptions. A sea breeze makes Karachi’s air more breathable than New Delhi’s. Pakistan’s poverty is less stomach-turning than India’s, perhaps because Islam mandates personal hygiene, resists a caste system, and doesn’t revere animals.

What Pakistan lacks in tourist structure, it makes up in enthusiasm and curiosity. Pakistanis were visibly excited to see visitors, peppering us with questions: “Are you having a nice time?” “Will you tell other people that you like our country?”

Far from being anti-Western, everyone seemed to have relatives in the United States or Italy. Honeymooning couples and vacationing families shyly asked for photos with me to add to holiday memories. A mosque shoe-keeper who overcharged us quickly paid us back when an angry bystander scolded him for making Pakistan look bad. A policeman who stopped us for a passport check mostly wanted to friend us on Facebook. Asked if he was a Punjabi, he replied, “Madam, I am a humanitarian first, then a Pakistani. And then I am Punjabi.” Sentiments that would benefit police everywhere.

One easily forgets the country’s official name: “The Islamic Republic of Pakistan.” Pakistani women drive (in terrifying traffic) and their dress ranges from niqab eye slits to jeans. They love fashion and Karachi billboards feature either cricket stars touting mobile phones or movie stars promoting the arrival of “lawn” season; not mowed grass, but fine printed cotton suitable for the hot summer.

I was not there just for tourism but to visit the schools of an organization for which I volunteer: The Citizen’s Foundation. TCF’s efficient and transparent model, which has earned it several prestigious international awards for social entrepreneurship, educates 160,000 children in 1000 non-religious schools across Pakistan. Founded in 1996 by a group of successful Pakistanis, TCF is showing how access to education – particularly for females — can transform their country. Our visit coincided with TCF’s Karachi chapter’s fundraiser, a dinner for 450 followed by a concert by Abida Parveen, a legendary Sufi singer.

The gala was held in the garden of the Karachi Parsi Institute, the English-style club for Karachi’s descendants of Zoroastrians who fled Persia and Muslim persecution between the 8th and 10th centuries A.D. Behind the art deco façade of the Institute’s original gothic building there’s a sense of the British Raj. Billiard balls clicked quietly and players, oblivious to the party, circled a massive Victorian pool table flanked by raised cane-backed benches for spectators and a century of photos of men’s and women’s cricket teams.

Outside, the alcohol-free cocktail hour felt more like a DAR tea. The buffet line was a perfect — and chatty — British queue. The festive crowd made a strong case for Eastern dress; knee-length shirts, vests and embroidered caps made maharajahs of middle aged men with paunches and bald spots. “Does this make me look fat?” may not be a marriage-busting question in Pakistan, where gorgeously decorated shalwar kameez — trousers and shirt — and flowing shawls make women of all shapes and ages beautiful.

Guests enjoyed Sufi singer Parveen’s performance while lounging on dozens of mini-living rooms set up on the lawn, complete with white sofas, armchairs, rugs and table lamps. Or you could recline on rugs and Moghul-style bolsters spread out in front of the stage. Purring electric fans kept the air moving, while waiters circulated with coffee and fruit juices. Without the nervous lubricant of alcohol, overindulgence seemed limited to the gold- and silver-leafed sweets on our living room’s coffee table.

My hosts explained that Parveen sang in various languages — including Urdu and the local Sindhi — and that the program featured poems from the esoteric Islamic religious Sufi tradition. The 62 year-old Parveen may look like a cross between Jabba the Hutt and Janis Joplin, but the depth and power of her voice transport her and her audience with the hallucinatory mysticism of ancient religious prophets. Not understanding the lyrics or the complex themes and rhythms, which resemble both jazz and the Western sonata, I couldn’t fully appreciate Parveen. The rest of the audience could. They swayed and took selfies while mouthing the poems’ familiar words. I could appreciate the night’s soft air, the perfume of the garden’s white bowers, the distant noise of a busy city and the borderless power of music.

One song, my host explained, was about the singer’s relationship with God. “For the Taliban,” he said, “this song is blasphemy.” He waved his hand over the magical scene. “They hate us for it.”

A few days later a bomb killed 15 on a bus in Peshawar.