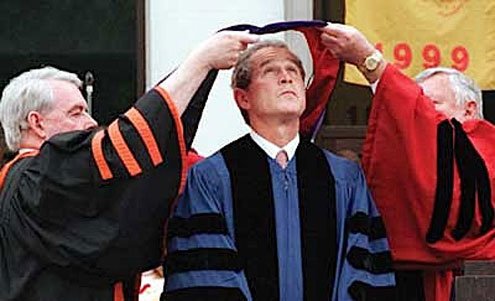 Gov. Bush got to know Austin well.
I

came to Austin, Texas, expecting a culture as foreign as Italy, a place filled with cowboy boots, pick-up trucks, and people who actually say “Hey, ya’ll” and “Hee Haw.” But despite the stereotypes and the ubiquitous t-shirts proclaiming “Keep Austin Weird,” Austin really isn’t all that different from the rest of the United States and in many ways is a small-scale model of all that is good and bad about this country. Let’s start with the good.

No other nation can claim the same ethnic, religious and cultural diversity. Spend a few days in Austin, the Texas state capital, and you’ll see heterosexuals and homosexuals. There are blacks, whites, Asians, Indians, Native Americans and more. Drive around and you’ll find Catholic cathedrals, Protestant churches, Jewish synagogues and Buddhist centers. Moreover, few countries can claim the harmony that we have achieved among all these groups. Yes, we have racism, hate crimes, and discrimination. But for the most part, we coexist peacefully with our myriad neighbors.

America has a rich and vital culture.

Conventional wisdom defines U.S. culture as blockbuster movies, fast food, and mega-stores. But head to downtown Austin on a Friday night, and you can hear jazz, bluegrass, soul, R&B, rock, country or classical. Forget the multiplex, and go to the theaters and galleries where talented new — and not-so-new — artists are building on a legacy of American arts. U.S. culture has been unfairly maligned as inferior to that of Europe or Asia or pretty much any place that isn’t the States, but on any given night in Austin — as well as many other cities — artists are laying lie to that reputation.

Driving from Pennsylvania to Austin, I passed through valleys and across mountain ranges, along rivers and past lakes. I saw grasslands and farmlands, and had I kept going west I would have hit desert, then long stretches of golden beaches. Going north I would have seen plains and eventually the glaciers of Alaska. We are a country rich in fertile soil, accessible water, and abundant other natural resources, a richness that can be measured in both economic and aesthetic terms.

So we have a lot to be proud of. But the news isn’t all good.

We may be the most diverse nation, but we are still divided. It’s been a quiet division, lacking the drama of a wall being built across neighborhoods, large-scale resettlements, or refugee camps, and so we’ve been able to pretend that it doesn’t exist. Spend a few days in Austin and you’ll see all kinds of people, but rarely will you see them together. Hyde Park houses the progressive, upscale academics and artists; to the south are the conservative middle-class suburbanites; the East Side gets the poor minorities. While not insidious on its face, these divisions allow us to ignore lingering inequalities: the substandard housing and schools in poor inner cities, the disproportionate number of black men in prisons, the legalized profiling of those with Middle Eastern features. We can’t let our diversity make us complacent about reaching equality.

We don’t value or encourage culture in our society. We think nothing of plunking down ten or twelve dollars for a movie ticket but balk when an art museum charges the same. We flock to the overpriced Broadway blockbusters and ignore the small theaters just a few blocks away. We would rather give our money to chain bookstores to buy the latest bestseller than support our public libraries or seek out lesser-known writers. This attitude is reflected in our federal spending. The National Endowments for the Arts and Humanities are the last priority for funding and the first in line for budget cuts. American culture isn’t an oxymoron, but it can’t survive if we don’t support it.

We take our natural resources for granted. On my drive to Austin, I saw a lot of natural beauty, but I also saw a lot of waste. In Columbia, South Carolina, lawn sprinklers went on in the middle of a rainstorm. In Austin, a city with an extensive bus system and a strong commitment to encouraging bicyclists, the streets are jammed with fuel-inefficient SUVs and trucks. Our wetlands and nature preserves are in danger of being sold off for mining and oil. Wasting these resources not only mars the physical beauty of the country but also puts us in a precarious economic position.

The war in Iraq is an important concern as we cast our votes in November, but it shouldn’t be the only concern. The environment, the arts, civil rights — these should at least cross our minds, if not change our votes. Otherwise we risk losing what is good about the United States and becoming the uncultured, uneducated, irresponsible bullies we are reputed to be.

About the Author: Lisa Bintrim