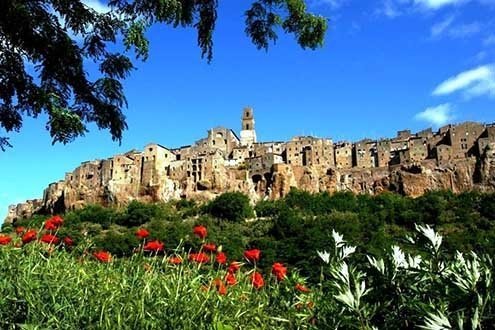 Its time for a gentler, softer approach to Manciano, in Tuscany's La Maremma.
I

am the very first person to tell you that expat life isn’t all “Under The Tuscan Sun” and proseccos on the terrace. It’s hard and it’s depressing and it’s lonely and it’s confusing.

I’ve beaten that particular horse so many times and so hard that I’ve made my own glue. But this month I came to the conclusion that I don’t want to be the only person with a sharp pin at a kid’s balloon party anymore.

I’ve crushed enough dreams and traumatized more than my fair share of retired Diane Lanes. I can’t end up like that “Eat, Pray, Love” woman who went through the utterly exhausting journey of finding the man of her dreams only to announce that she was divorcing him 12 years later.

So The Sticks and I are getting couple’s therapy. We’re starting over, and this time we’re looking on the bright side of life.

There are so many — okay that’s an exaggeration — there a lot of things to love about Manciano and the people who call it home. If I weren’t having so much fun being the ultimate buzz kill, I probably would have stopped to appreciate them more.

Over the weekend, we held our annual palio. A ridiculously dangerous race where grown men battle to roll a water-laden wine barrel around the tight corners and steep inclines of our town. It’s the sort of thing OH&S would never let you do anywhere outside of Italy, but it’s also the perfect excuse to yell at the neighbors who by some arbitrary division happen to live in a different rione (district) to you and are therefore your enemies. The brave men who roll these barrels (and there are fewer each year with all the injuries) are treated like heroes during the run-up — until they invariably slip up, accidently invade the opponent’s lane, are disqualified and become the disgrace of the district.

The race was the highlight of the summer, second only to the week the local supermarket had beefsteaks from around the world. In small-town Tuscany, a trip to the shops is a trip to the farms and producers of the region. It’s a daily ritual where you pick up only the ingredients you need for lunch or dinner. If you don’t get in before 11a.m., you’ll miss out on the day’s baked bread, after 5 p.m., there’s no fish to be had and on Sundays, you’ll be picking through the last of the summer vegetables before the next delivery arrives.

When you don’t have everything at your fingertips, you learn to appreciate the little treats like Angus beef week or finding a papaya among the oranges and peaches. At the same time you take for granted that the cheese you distractedly threw into your basket alongside the artichokes and guanciale that Antonietta freshly sliced exactly the way you like it are the stuff the rest of the world only finds in gourmet shops. The last time I was home, my sister paid 20 Australian dollars for a few sickly slices of truffle cheese. The saleswoman cut through the generic yellow slab dotted with only the faintest memory of truffles like it was dairy gold and looked at us like we were unworthy of its magnificence. I could have bought the whole wheel in Manciano for €10. And everyone in town would have known all about it because that’s the way small towns work. Familiarity breeds gossip, but it also begets an unshakeable sense of wellbeing.

It’s the cliché of every small town, except for the one in TV’s “Midsomer Murders,” to say it has no crime. I’ve always been of the opinion that if a town has a police station then it has people doing shady stuff. Manciano has two, but its police officers seem to spend all their time sitting on the outskirts of town staring at their phones and pretending they didn’t just see you blow past that stop sign.

I lived in an apartment building where everyone left their keys hanging outside their doors. They were so confident nothing bad would happen, they didn’t even stop to think that someone could come, lock them in their own apartment and nick off with their car keys.

As the sun sets in my little town, there is such peace. If it weren’t for the handful of kids who can’t resist pressing all the buttons on the town’s only ATM until it goes into overdrive and yells out in pain, you’d say the silence was absolute.

It’s a comforting silence. One of the status quo and happy families tucked in front of the latest episode of “Don Matteo.” It’s the awareness that you’re surrounded by a beautiful landscape that didn’t change for your ancestors and has no intention of changing for your descendants.

But it’s also the silence of the tomb. Like so many small Italian towns, Manciano is dying. Every year, a tiny fleck of fear wiggles its way into our bubble of safety, and we cling to our traditions all the tighter with every store that closes and every house that lies empty and forgotten.

But that is a story for another day.