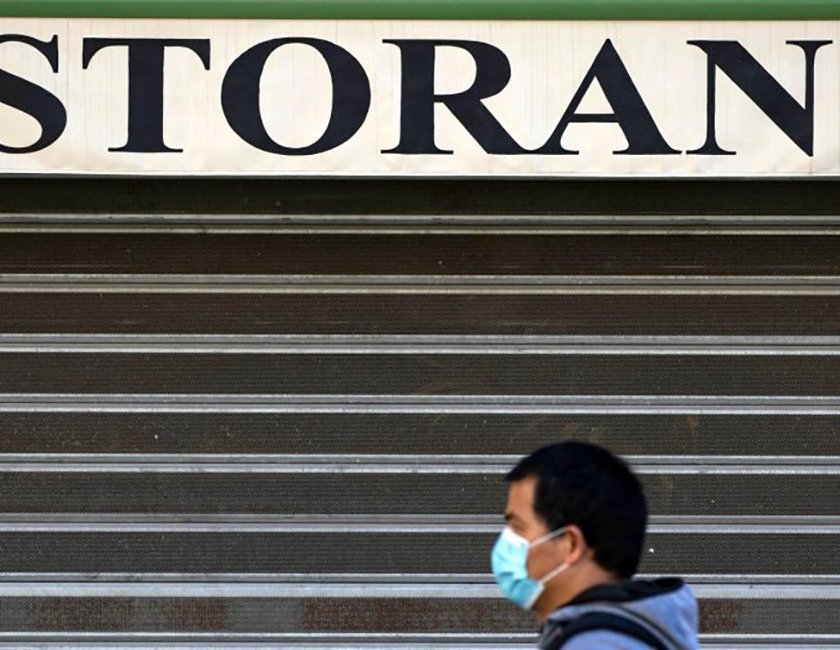 For restaurants the world over, grim is the word...
H

anging on the wall behind the cashier’s counter in Flavio’s restaurant and pizzeria some five blocks from Rome’s Tiber River was a vintage black and white photograph of the then-owner of the restaurant shaking hands with the Italian actor Marcello Mastroianni, whose starring role in Federico Fellini’s 1960 “La Dolce Vita” elevated him to global stardom. Mastroianni played a disillusioned character in a city whose life was anything but sweet, an irony just as suited to Rome life 60 years later. Scrawled on the framed photo are the words, auguri, a word that means both congratulations and good luck. The photo is now face-up in a carton at the center of the dining hall where tables were once closely bunched.

Flavio closed the restaurant he purchased with two investors in 1976 on Dec. 1, 2020. As the COVID-19 pandemic persists, with no reinstatement of daily life as it was in sight, keeping the near-empty enterprise open “stopped making any sense,” says Flavio, who requested that his surname and the name of his establishment be withheld. “I have legal battles to deal with, and in these times no one is really on your side.”

Tourism in Italy is down 98 percent, with travel to the country difficult. The recession-stricken nation’s GDP is expected to contract by at least 10 percent, the highest virus-related drop in Europe.

In Rome, the damage to restaurants, many family-owned, is extreme, all the more so for restaurants that have only indoor seating.

Italian coffee bars have been somewhat less hit because many have all-weather outdoor seating protected by tarp awnings and warmed using gas heat lamps. “Look at a bar and you think all is well. That’s not true,” says Flavio. “It’s like makeup covering a huge blemish.”

The virus crisis has affected dining establishments globally in a similar way, and is widely seen as the worst non-war related calamity to beset the restaurant business since the end of World War II.

Flavio spoke to Cristina Polli about his predicament, and that of his wounded industry. These are translated excerpts from their exchange, shortened and abridged for clarity.

There is not enough money in the world to bail us out.

What was the last straw?

Technically, rent payments and mortgage obligations. But the handwriting was on the wall when the government divided the country into colored alert zones and made it clear it intended to shut down night life. We’d tried to come back [after the March-May lockdown], but again having to close at 6 p.m. made continuing impossible.

How many did you lay off?

Eight, but they are all on unemployment. It’s the owners who are taking the hit since there is not enough money in the world to bail us out. The government basically made restaurants into sacrificial lambs.

There are rumors underworld money has been floated to tempt owners into continuing by offering high-interest loans. True?

Yes, but I have nothing to say on that subject since it’s all unspeakably squalid. Some want to dip a toe in, some do not.

What are your own feelings on government policy on the virus, if you can possibly look at it objectively?

I can’t look at it objectively. I will say I believe there is a virus. I do not believe in conspiracies. It is real and dangerous. At the same time, my grandfather lived through typhoid and malaria in Rome. Many people were sick with contagious illnesses a lot of the time. It was a fact of life. What’s changed is that everyone now knows and becomes afraid. Panic spreads. Sometimes I feel like turning back the clock to that day when the expression “What you don’t know can’t hurt you” was the one every good peasant memorized. It may be false strictly speaking, but at least the crops were harvested.

How would you have handled this differently, since hospitals all over are filled with sick patients?

I think spreading tables out would have sufficed. The rest you would leave up to the people, since some out there are not so afraid of taking risks, especially since, for all the harm this disease has caused, it still makes only a small number of people very ill, and most are older. I think it would have been reasonable to keep places open with spacing, to demonstrate the importance of not stopping life. But this is a personal view. When you are afraid, you obviously can’t eat with pleasure. I would certainly have offered house wine for free, just to calm people down.

I will not but others will. This is not the apocalypse. People cannot stay at home forever. That also makes them sick. But I can’t see restaurants with indoor spaces only returning to normal for several years.

Tourists are crazy. I love them for that. When the borders reopen, they will return. Again, it will take years to recoup these losses, and I don’t have years. Others do, or may.

Did you consider take-out?

I’m too old for that sort of thing and we simply were not equipped to handle it. Switching to take-out also requires investment, and we were in the red before this happened. The country has been in bad shape for years. This is just a cruel joke that makes it worse.

Eating out is what cockroaches do every day. Humans will come back.

Has anyone in your family or on your staff been infected?

Not to my knowledge, thanks be to God. My younger sister nearly went crazy when she got a fever in September. It was the flu.

Should the government devise a bail-out plan for dining establishments?

In your dreams. They will help those industries that export and sell food in Italy. Restaurants can go to hell. [Editor’s note: The EU recently approved billions of euros earmarked for dining establishments, but how they will be distributed and what criteria applies remains unclear.]

I repeat to you: this is not the apocalypse. Eating out is what cockroaches do every day. Humans will come back. When, I don’t know. I do know wine will help, and once people lighten up just a little, and see others doing the same, the old mood will return.

But the victims of the virus will never again enjoy that mood.

That, dear lady, is called “life.” Before the 1950s laws [that closed casa di toleranze, or brothels] men kept getting diseases from risky conduct but went back for more. If you had tested Rome for STDs and other diseases last century, half the world would have run away. If you tell a starving person not to eat that loaf of bread because it is stale, old, has mold, and even insects, that person will devour it.

You don’t sound sad about what has happened.

I am in shock because this year came from nowhere, and not just to me, to all of us. We thought, “Poor Syrian refugees” or “Damned Syrian refugees,” but never for a second did we think we could be deprived or hurt in such a way. God has evened things out a bit, and maybe that was a long time coming for those who had not suffered for a long time, I mean suffered in a life and death way. I cannot believe I will not see my customers again. I enjoyed my work. I thought I would retire “in peace.” Instead, all was forced on me, and on others. My banker says he now has meetings just on his computer, which is fine, but you cannot have a meal with your computer. It doesn’t yet produce hot food or cutlery.