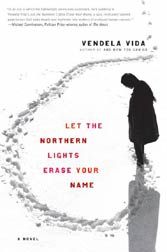 A 100 years ago, a publisher might have titled this “Clarissa Iverton Goes to Lapland” to solve its odd sensibility. And the oddness is palpable. After the sudden death of her father Richard, late 20-something Clarissa, who writes subtitles for a living, leaves behind her longtime boyfriend and Down’s syndrome little brother in New York and heads for the northern lights.

Turns out Richard wasn’t her real father, just a second-marriage stand-in for a Sami priest that her eccentric mother Olivia met while studying indigenous peoples in Finland. Olivia, a keeper of secrets and a cat named Taft, vanished without a trace when Clarissa was 14. Now, Clarissa turns sleuth.

Vida has written an psychological detective story that’s faintly comic and often trance-like. Clarissa (named of course after Mrs. Dalloway) keeps the story from surrendering to its own improbability: she’s a wild-child mourner and closet rape victim (a Vida theme) gifted in the art of simmering. She uses sarcasm to keep her erratic self-esteem from meltdown. That daddies are both beloved and monstrous (mommies no less so) is nothing new.