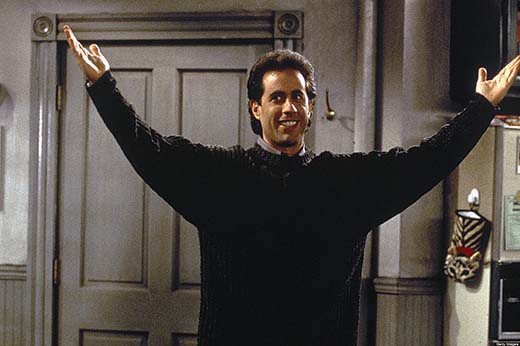 Jerry Seinfield in the 1990s: Americans fear success.
I

’ve recently had some success in my professional life, but when I share the details I always feel sheepish. I’m the first to place an accomplishment in its proper (to me minor) place.

It’s a complicated world. My getting ahead, even a little, is all about luck — maybe the actor chosen ahead of me got food poisoning, or so I tell myself. In the grand scheme of things I know I’m still a mouse.

In the House of Self-Deprecation, I am royalty.

Every time I tell a friend why my success isn’t really success, the friend usually cuts me short: an accomplishment stands on its own merit, the friend says. There’s no reason to work on downgrading it.

I know I’m not alone in doing everything in my power to diminish any semblance of achievement (see, I had to use “semblance of”). I belong to a kind of reverse praise club. If, as I suspect, the all-conquering Duke of Wellington busily name-dropped every 19th-century battle he ever won, I’d be the the anti-duke who kept his medals in a locked closet.

But why are some of us so quick to set aside what we’ve done? Why am I so quick — it’s an automatic response — to belittle my achievements?

In a telegram announcing his resignation from the New York Friars Club, comedian Groucho Marx famously wrote: “I don’t want to belong to any club that would accept me as one of its members.”

Funny? Yes. But he was also onto something. If I have a personal breakthrough I immediately wonder, Groucho-style, if it’s worth taking seriously. I usually decide it isn’t.

Don’t get me wrong: I enjoy setting goals and I have real aspirations. But the second I flirt with fulfilling them, I suddenly question their worth. But it’s not the worthiness of the accomplishment that bothers me, put the value I place on it, or refuse to.

Everyone wants to win an Oscar in a year when the competition is thick, not a down year when people are stuck picking the best of a mediocre bunch.

The actor Jeffrey Seinfeld once said that the fear of success is one of America’s deepest anxieties.

Yet that’s a deeply flawed method for measuring success. Reaching goals, including winning awards, is not just about achieving the pinnacle of success; it is about celebrating all the years of effort that has gone into the work, and about the determination that got you there.

That’s why ignoring even little breakthroughs is an offense to the self. It does much more than just disown part of your work: it denigrates the person behind that work.

The catch (and it’s a big one) is that saying this aloud, and believing it isn’t the same as applying it to my own progress. There are so many ways to sidestep honoring yourself. You can minimize what you’ve done as a fluke or a one-time thing never to be repeated.

The actor Jeffrey Seinfeld once said that the fear of success is one of America’s deepest anxieties — ironic in a country where everyone wants to win.

Once you’ve done something noteworthy, in come the nagging fears about your worth. You did it, yes, but can you do it again? The U.S. music industry coined the phrase “one-hit-wonder” for a reason.

Don’t make success into a pimple you need to pop to make things better.

But even that’s a (money-driven) fallacy, since one success remains an all-out accomplishment. Having a second child doesn’t devalue the first.

I suspect our fear of not being good enough the second time comes from the same original source: our inability to objectively assess our skills. The film industry is a good example of this. Many actors worry that they’ll only ever get one role, which of course translates into having been at the right place at the right time, and so on.

Another mistaken belief is that the industry abhors taking risks; producers want people who have skill, work hard, act well, and show up on time, because, of course, it’s their money on the line.

Once they know you can do all that, and that you’re confident in your own training, they’ll most-likely hire you again. And yet self-worth remains elusive, particularly among women.

The bad news is that I don’t have a bandage to patch up all this doubt. I can’t make it better just by pointing it out in an essay.

I will say this: don’t make success into a pimple you need to pop to make things better. Doing that doesn’t help, on the contrary. So let it be.