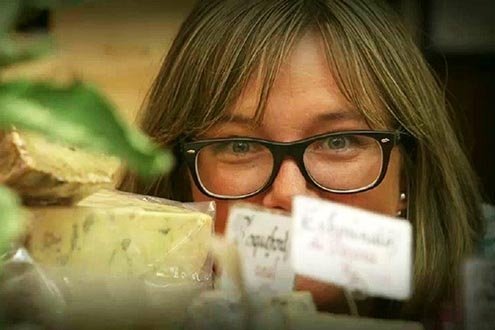 The author in her new, and cheesy, TV element.
I

’ve always worked behind the camera. I was a freelance script supervisor for 15 years. While I did get the occasional cameo — production teams save cash by casting crew-members in bit roles — that was as far as it ever went.

My family’s showbiz heritage aside, I never imagined finding myself in front of the lens.

But in 2010 I opted for a crazy career change that ended up downsizing both my duties and my income. I decided to focus on writing about food for print and the web, quite a shift from my script supervising days. The transition allowed me to be a mother to my son. It’s also brought unexpected attention to my writing and sparked a newfound love for both composition and photography. My budding new profession also helped imbue me with a more entrepreneurial outlook.

Amid all this reinvention, I pitched an idea for a TV show about the cheeses of Italy. It was almost an afterthought. Out of the blue, the idea was picked up by Italy’s top food network.

But their interest came with a caveat: I had to be on-screen face of the program, called “A B… Cheese.”

Who would ever have thought an overweight and middle-aged nobody would fit a demographic profile? But somehow I did. The show is filming its second season and the ratings are through the roof.

But I’m not here to brag. I do want to open a small window into my new life. The income is nothing to boast about and there’s no job security in the entertainment industry. Ah, but the people!

I’ve met farmers, cheese makers, and cooks (a handful are featured in each episode). I’ve heard countless stories and learned all kinds of life lessons. The word that most comes to mind as a result is gratitude.

While my role is just to watch, taste and make faces, the working people who give life to the show are humble, earnest, spontaneous. Make no mistake: the life of the cheese maker or cattle breeder is hard. Breeders wake up at dawn daily, depend on their manual skills (a treasure), nourish their animals (health is essential), and don’t have the slightest idea what the word vacation means.

These non-glamorous people have given me a new and richer appreciation of the need to be thankful for little things.

They’ve taught me that pesticide-free pastures mean wholesome milk, the pure gold from which superior cheese is made. They’ve shown me the value of techniques handed down over generations. They’ve demonstrated that inner clockwork — intuition born from experience — can be more reliable than a stopwatch. Above all, they’ve given me a sense of perspective. These aren’t people who put their ego first.

Some work in spotless environments and wear lab coats. Others craft products from the corner of a garage. One particularly characteristic casaro decided the best time to have a cigarette was while squeezing whey out of freshly cut curds — a very delicate phase of cheese making. “Tutta salute” (“All in health”), he shrugged when we pointed out the risk of falling ashes.

On the down side, I will say no cheese passion is great enough to see you through being forced to eat a piece of cheese 15 times (and make it look like you’re enjoying it). My cholesterol levels have rocketed. I need to do a juice cleanse after every shoot.

After filming ends, the farmers or cheese makers usually invite the crew for a snack or a full — and cheese filled — lunch. It’s rude not to oblige, so I smile and eat.

By perverse scheduling karma, these meals tend to happen just before an episode’s final scene, which is scripted as a multi-course dinner with wine. At times, the dinner scene is filmed first thing in the morning.

But I’m not complaining. That’s showbiz!

Another lesson I’ve learned might seem banal: behind every product is an individual with a life history, someone with idiosyncrasies, superstitions, personality quirks, and dreams. Each of these intricate characteristics plays a role in the flavor and texture of the cheeses they make. Cheese making is a magical procedure that requires extreme precision but changes depending on the maker. No two cheeses we’ve filmed for the show is made same way. The key ingredients (milk, rennet, salt) and applications (heat) are a constant but the results remain deeply personal.

For many families, transforming freshly extracted milk into cheese is their only means of support. Ruthlessly and voyeuristically, we “steal” intimate images of their daily routines. There have been many charming and powerful moments.

We met a diehard left-wing Tuscan sheep farmer who kept a framed portrait of Lenin on his desk. But before breaking up the curds with a wireframe cutter, he would cross himself and the gelatinous contents of his cauldron.

We talked to a woman who in my view crafts the best burrata in the Bari province. She was once a fashion stylist but set aside a comfortable lifestyle to open a masseria farm in the middle of the parched red soil fields of Putignano. Her sparkling green eyes seemed to say, “Follow your dreams, even if they mean sacrifice and hard work.”

Which brings me to a final word: inspiring.