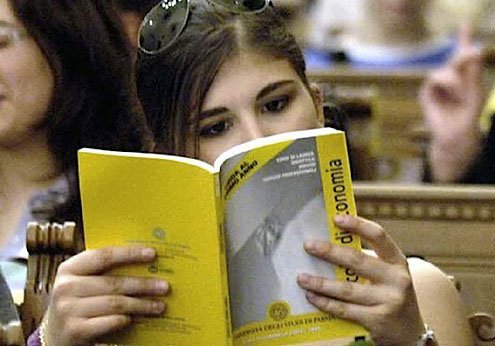 If Maria put her hand up in class, you could be sure her answer would be wrong, even though it sounded impressively authentic to the rest of us.
I

f I am here living in Italy, a large share of the credit — or the blame, depending on how you look at it — must surely go to Carla. She was the wonderfully exotic creature who first introduced me to Italian, when I was still a 16-year-old schoolgirl.

In our rather drab convent school, where the nuns wore long black habits and a perpetual scowl on their faces, Carla was a breath of fresh air. At a time when hardly anyone in England learned Italian, she offered lessons as a diversion, to sixth formers seeking light relief from the slog of the normal timetable.

From the moment she walked into the room, she had us transfixed, with her glamorous clothes, intoxicating perfume and a fascinating gold watch that was part of a bracelet, which she played with constantly as she waved her hands about in that quintessential Italian way. Although not compulsory, her lessons soon became very popular, and we raced ahead with our Italian verbs, dipping into Pirandello and Bassani with an enthusiasm that was never matched in the mandatory French classes.

The nuns, it must be said, were not quite so keen, and banished her to the furthest reaches of the rambling old building, so that she could give her lessons without disturbing any of the other classes. For when Carla got worked up, as she very often did, she had a tendency to shout, which we all found hilarious, but which caused eyebrows to be raised amongst the rest of the teaching staff.

Although she had lived in England for a very long time, Carla never really mastered some of the trickier idioms, and invented her own colorful adaptations of Italian expressions. Our special favorite was “You do like that and you get away smartly!”, which she trotted out at least three or four times every lesson when she wanted to show us how to get round a difficult translation. Little did I know it at the time, but as I was to find out in years to come, this catchphrase encapsulated an entire approach to life – the uniquely Italian art of arrangiarsi — of making the best of a situation, of turning something to your advantage.

Only one girl failed to thrive under Carla’s wing and surprisingly she was Italian. Her name was Maria and to be precise, she was half-Sicilian, and wore earrings even though jewelry was banned at school. Carla loathed her for it, and took every opportunity to criticize her, even though she spoke far better Italian than any of us. For Carla, who came from an upper middle-class family in well-heeled Ferrara, was a frightful snob and made it quite clear that poor Maria was the lowest of the low. If Maria put her hand up in class, you could be sure her answer would be wrong, even though it sounded impressively authentic to the rest of us.

Carla was ostensibly a religious person, but like many Italians, she lived Catholicism on her own terms. Married to an Englishman, she subsequently divorced and remarried and her greatest wish was that we English girls would one day find a nice Italian husband.

I was the only one of our class who did just that, except poor Maria, who didn’t count. Carla also had her own peculiarly Italian moral code, as I was to find out. At the age of 18, by now totally smitten with Italian, I decided to take a Scholarship exam — the most challenging level there was. As I was the only pupil sitting the exam, the nuns arranged for me to do it in one of their dark and spooky dormitories. Carla was given the task of adjudicating and presented me with the exam paper in a business-like way.

The texts were difficult, but not impossible, though there were some words where I would just have to make an educated guess. About three-quarters of the way through the proceedings, Carla sidled up to me shiftily and started whispering, though there was no one else in the room. “Are there any words you don’t know?” she hissed, looking around anxiously. I was flabbergasted, but I quickly regained my composure. It would have taken a saint not to have given in to this kind of temptation. I swiftly indicated three or four words with my pencil. She disappeared for a few minutes, before returning furtively and sneaking a tiny piece of folded paper under my hand. On it, as I knew they would be, were the translations of the troublesome words.

When the results came out, I got a distinction. I like to think I’d have got it without Carla’s extra help. But in her very practical, Italian way, she just wasn’t prepared to take that chance.