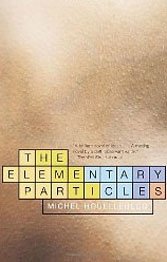 By Michel Houellebecq, translated from the French by Frank Wynne

Imagine a suspension bridge dividing existentialism, an ode to both existence and its absurdity, from postmodernism, which one-ups absurdity by adding irony and portraying lives that are poignant but pointless. Houellebecq’s ambitious Les Particules élémentaires scurries back and forth across such a bridge, at times boldly and brilliantly, only to conclude the entire construction was flawed from the start and requires rebuilding.

His vision of broken, turn-of-the-20th-century France is seen through the eyes of molecular biologist Michel, a man of limited affect whose sense is his science, and his half-brother Bruno, chubby, enslaved by his penis, his life a chronicle of masturbation, copulation, and droning on about his worthlessness. Both men are in their 40s and neither has much of the hold on the present, let alone the ability to feel at ease with women, a gender whose existence seems little more than a footnote to male masochism. Neither man can fathom loving, leaving the book’s burden on Bruno’s incessant sexual pyrotechnics (he will ultimately go mad) and Michel’s quiet goal of replacing humanity, a “vile, unhappy race,” with a new species unfamiliar with vanity (a fellow scientist calls him “the saddest man I ever met.”) Women, mothers and lovers, are intriguing but dead moons.

Houellebecq using his aching duo and the legacy of their sexually rampant 1960s parents to indict the 20th-century and set the terms for transcendent overhaul. “All around the surface of the globe,” he writes of the year 1999, “a weary and exhausted humanity, filled with self-doubt and uncertain of its history, prepared itself as best it could to enter a new millennium.”

While there’s no trifling with Houellebecq’s razor-sharp denunciation of individualism and personal freedom as consumer-era frauds (take that, Ayn Rand), man’s self-replacement hardly seems utopian, and the human demoralizing that precedes molecular transformation too thick to cut through. Ultimately, this is a visionary suicide whose author is never quite able to decide which he likes more, the vision or the death.