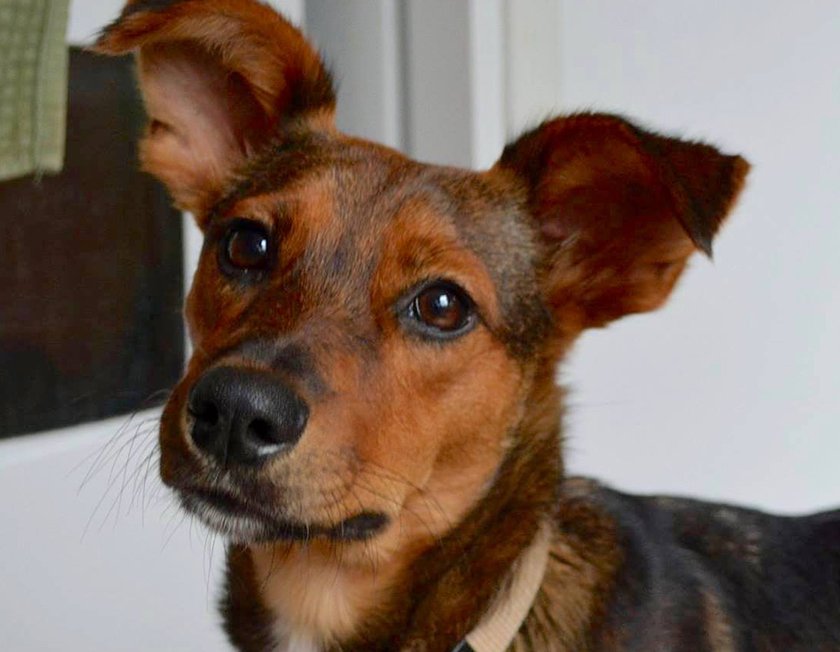 The potcake is a Caribbean "street urchin" dog.
I

was studying for a three-hour French exam, scheduled the next day, while getting ready for bed when I heard a neighbor pass by our rural Normandy house.

I wasn’t the only one to hear the footsteps. Our dog Libby immediately began stridently barking, as if danger lurked. Big sounds from such a small creature, I thought to myself.

Libby kept to her lyrics long after the neighbor had passed, as if she felt compelled to finish this lengthy speech about the state of her world.

“All right, Libby,” I muttered finally. “You’ve made your point.”

Libby, who’s five months old, had an alarmingly visible rib cage when we first adopted her. No longer.

But Libby wasn’t our first additional family member. Before her, and still present, came Perle (pronounced Pearl) who we’d taken in almost exactly six years before Libby joined us in March.

Libby arrived only a few days after I’d interviewed a friend who is a brilliant poet and a priest, Spencer Reece. For whatever reason, I had a providential sense (what else to call it?) that a second dog would bring additional poetry to my days.

Both Libby and Perle have Homeric odysseys to their credit, both born on the streets of the Caribbean island of Guadeloupe, a so-called département et région d’outre-mer (DROM), a clunky way of saying a French overseas territory. The island is also a former colony dating back to France’s one-time empire in the Americas and Africa. Both dogs, possibly related, are thoroughbred mutts.

I often watch as they scuffle playfully on the carpet. Both hail from a proud and respectable line of Caribbean street dogs, chiens creoles, known as “potcakes” in English. The name derives from the sticky underside of the cooking pot used by locals to make meals of rice-and-peas, often fed to the dogs. Guadalupe was and remains a poor stretch of island land.

The dog are an emblematic part of the island’s culture, immortalized in songs and recognized as an “official” breed.

We adopted Perle and Libby by way of a charitable organization that brings these often malnourished potcakes to France, where they’re put up for adoption in a foster family.

Both dogs hail from a proud and respectable line of Caribbean street dogs, chiens creoles, known as “potcakes” in English.

But it’s adoption on a clock, for a set period of time, which can make for sad scenes when dogs and their foster owners are parted when the time elapses. An attachment to a pet can become deep and emotional in a hurry.

It’s an admittedly unusual system, but I can’t fault those who move mountains to bring street dogs to a place where they might live better and more diverse lives. They’re like foster children moved from one loving home to another.

I use the story of our two dogs to illustrate something that operates on a deeper, telepathic level. By this I mean the way the potcakes — and dogs in general — invite us to consider the ways in which any living thing can speak to us, though not necessarily in identifiable languages.

When Perle quakes during thunderstorms, Libby immediately begins to bark. In patiently listening to this storm chorus I have a strong feeling that at a visceral, natural level, in terms of awareness of what’s immediately transpiring around them, they’re worlds ahead of me, closed in a house and oblivious to what nature might have in store. They know to respond to the grumblings of the loud world around them.

The American writer and humorist James Thurber once quipped that “certain dogs would go to heaven, and very few persons.” Allow me to reformulate this. Heaven isn’t at the heart of the matter, not when it comes to dogs. Rather, dogs can be the source of inspiration, if not teach it through how they behave. They can make anyone, including this modest writer, suddenly look at and appreciate the world in an entirely different way, one that many might take for granted.

Case in point is one Will Keppler Robinson, who takes to writing soon after watching two potcakes from Guadeloupe rapidly devour dinner from their bowls, inspired by their satisfaction, and feeling a little of his own inside.