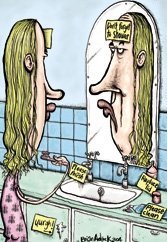 talian women are notoriously clean. I always thought it was domestic neurosis reflecting boredom and perhaps frustration. My friend Katy prepared Thanksgiving dinner last year, promising to clean up the kitchen when she returned from the feast. Instead she came back to a spotless kitchen, oven included, and the Birkenstocks she’d worn while cooking bleached and resting on the bathroom heater. “They were oily, so I took the liberty of cleaning them,” her housemate explained. As Giacomo Leopardi wrote, Italians reserve all their pride for their intimate space — the house is clean, as the family is sacred; what’s outside is the state-as-enemy and can be dirtied. And domestic work primarily falls on the shoulders of women in this country.

For several years, I lived with one of these super-clean females. A student of architecture, and a wealthy, spoiled only child from the South, Maria Stella had taste. The apartment was gorgeous, perhaps owing to the fact that she regularly buffed the hard-wood floors and shuffled around on pieces of carpet to not scuff up the half-day’s work. If peculiar for this, she was also serious and forward-looking about her studies and career. Impressed with my scholarship, she was interested in learning about my culture, and for a time, my own interests. We were never intimate, except for that occasional hour in the day of sharing a coffee, when we shared hopes and dreams in the most unreserved of ways.

I was grateful to have found this in a young Italian woman, firmly convinced of her future in a context so riddled with self-defeatism. When her boyfriend of eight years dumped her unexpectedly, it was me who told her, “You were too good for him anyway. Now you can concentrate on writing your thesis.”

And she did. Brilliantly.

Girls grow up, or need to, and as we both demanded our own space, our conversations became shorter. Her hints were so ingratiating they became comical: the broom left by my fallen hairs on the bathroom scale, a post-it note left on the bathroom sink, pleading with me to wipe up the tiny glob of toothpaste in the bowl, her silverware, disinfected and then hidden from view. The family of cats dumped suddenly on me from my ex, which she ordered out in a fit. “Pay attention,” she longed to say. “Because you’re here more than you used to be,” she did say, her downward glance avoiding my flushed face.

She made my life miserable before we went our separate ways, as I went blindly, eyes tight shut, through the worst months of my young adult life.

Months later I would see why I would come to thank her, in silence. To realize that by making me clean, respect the apartment — our shared space — she was insisting on life, on responsibility, on mutual respect and on self-respect. And that by my responses to this, swallowed disdain tossed aside for tolerance, I had insisted on rising above. I went to her dance performance, asked about her boyfriend, and advised her about jobs. “What do you most dream of designing?” I would rein her in. I continued to offer support where it was needed — out of principle — and closed my eyes to the rest. And when we met up again, it was as sweet and inspiring as the first time.

The night after my break up, which was filled with intense arguments that spear headed my miserable months, I drifted into the apartment about noon, as Maria Stella was getting ready to head to the university. She was anxious: “Kristine, I was terrified last night. I was woken up by startled neighbors. And then I realized that it was your radio that had gone off, full-blast, in the middle of the night.” The radio that my ex had given me: the broken box with a mind of its own that would lurch on and off to its own heart’s content.

When I first saw her, what was going through my mind to say was a rush of worry: “Did I do the right thing in leaving him? Please tell me that I did the right thing.”

After I reassured her, that swell ceased. No longer necessary, I smiled and said, “By the way, you look really good with your hair back.”

Before moving out, I cleared all my stuff out and cleaned my room as I had found it. The only reminder of myself that I left — on my desk — was a piece of olive branch, with a few strands of my long blonde hair woven into its intricate embrace. “Now I can leave,” I thought. “A real Italian will know that one is never to discard olive branches and all that it comes into contact with.”

Sisterhood is a fragile thing. Females are unstable beings, their sensitivity often driven too far from sweet ends. But it is a strong if subtle thing in a world where the Feminist movement, our mothers, have already planted the formal seeds for us to do as we please.

We aren’t collectively fighting in-stitutions in defense of our controversial salvation. The battles today are multifarious and they are private. But finding solidarity amongst the like-minded of the gentle sex throughout the world still means something. And when it happens, it is a discovery worthy of the sacred.