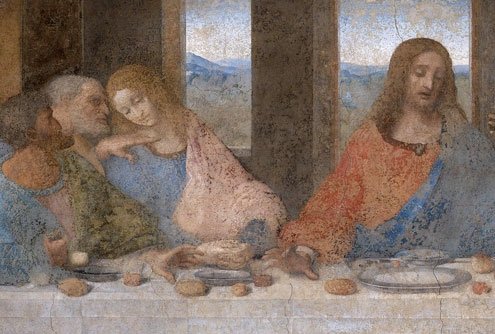 John, Giovanni, is to Jesus' right (left from the viewer's perspective), and appears to swoon.
I

have lived in Milan for more than 10 years and until a week ago I’d never seen Il cenacolo, “The Last Supper,” Leonardo da Vinci 15th-century Renaissance masterpiece. What’s worse, even though I pass the church of Santa Maria delle Grazie every Friday afternoon, I’d never even tried to get a ticket.

I told myself it was because I hate lines and crowds, or that I’d seen pictures of it in books and I didn’t want to be disappointed by the real thing. I also worried that the underlying reason might be that I’m just lazy and uncultured.

The other evening my friend Luisa invited Alberto and I to a private viewing of the painting paid for by a pharmaceutical company. There were only 15 of us, along with two guides, and we pretty much had unlimited time to take it in. It was the opportunity I’d been waiting for and I must say it was splendid.

I am neither an expert nor art critic. But three things struck me in particular:

The first was the painting’s sense of perspective. It really does appear to be a portal into a room of its own. Second, Leonardo’s composition is such that the figures gathered around the table create a kind of perfectly balanced pyramid or triangle that appears natural and not contrived. Finally, there’s an overwhelming feeling that the scene is animated, alive.

Leonardo’s success in portraying the scene isn’t just technical. He transmits his own passion, and as a result the passion the characters have for one another.

Particularly notable is the figure of John, Giovanni, who is seated to the right of Jesus in the painting and appears curiously feminine. Many of us are familiar with novelist Dan Brown’s notion that John represents Maria Magdalena, the wife of Jesus. While a good conspiracy theory is fun, I’m not convinced that Leonardo, living more than 1,400 years after Christ and thousands of miles away from the Holy Land, would have had any special insight into whether Jesus was married.

I asked our guide about John’s womanly appearance and she explained that Renascence painters commonly depicted adolescent males with feminine qualities. Good explanation, but it felt somehow too simplistic. Above all, art is communication, and I still didn’t understand what Leonardo was trying to say.

John was the disciple who Jesus “loved best,” and thus Leonardo was charged with the task of expressing that love. A number of biographers have argued Leonardo was homosexual. If so, he would have understood love between two men through the eyes and desire of a homosexual man. Still, I don’t think that Leonardo had any secret knowledge about the sex life of Jesus or intended to suggest that Jesus was a homosexual.

What he needed to do in the painting was communicate love between John and Jesus in a way that all could find accessible and understand. He accomplished this by transcending male and female representation and separation between homosexual and heterosexual desire. Thus John, a young male, has highly ambiguous female attributes, enabling Leonardo to breathe his understanding of passion into his depictions of both John and Christ, while at the same time conveying that passion to viewers on a very basic level.

A few days after we saw the painting, my friend Luisa and I looked at a print of La Giocanda, the Mona Lisa, thought to be a portrait of Lisa Gherardini, the wife of Francesco del Giacondo. I’ve heard theories that the Mona Lisa is actually a Leonardo self-portrait. The eyes could be those of a man, at least to me, but Luisa said it was just lack of mascara or eye shadow. We both agreed that her mouth could be a man’s.

Again Leonardo appeared to have transcended the boundary between masculine and feminine beauty and possibly between hetero and homosexual desire. Perhaps it’s this ambiguity, or even irony, that’s makes Mona Lisa’s smile so indefinably alluring.