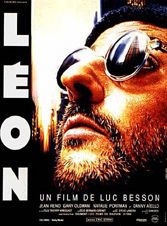 Anglo critics torched Luc Besson’s odd-couple movie for its “child abuse.” But Frenchman Besson (“La Femme Nikita,” “The Fifth Element”) doesn’t play by square rules. Jean Reno (Léon) is a dour hit-man who does his job, follows a code (no women and children), and generally minds his own business. When 12-year-old Mathilda (Natalie Portman) takes refuge in his New York apartment after crooked cop Stansfield (Gary Oldman) guns down her family, things get quirky.

The taciturn Léon and orphaned Mathilda become one another’s pets. They teach each other tricks. Mathilda gets Léon to read. Léon instructs Mathilda on sniper-scopes. Inside all this is the clockwork of revenge. Too slick? Perhaps. But who cares? It’s a consciously comic book story with characters designed to last 90 minutes, not a lifetime.

American distributors, troubled by the simple French title, changed it to “The Professional” for U.S. and UK release.