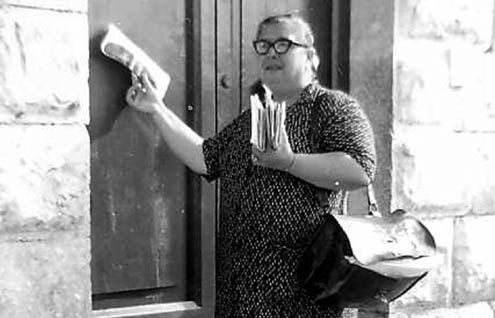 or some years now, I’ve worked from home, and for most of the time it suits me pretty well. The most obvious advantage for anyone with children is being around when there is no school, which in Italy means most of the time.

Last week, two out of three of my offspring came home at 11 a.m. three days on the trot because the teachers were busy being union members. Tomorrow one of them leaves at noon because she has an important athletics contest in the afternoon and has to have a “light lunch of pasta and fruit” and then rest, according to the irritating little note that arrived home with her yesterday. And then of course there are the summer holidays, which last for three long months.

There are other benefits too in not having to go out to work. No office politics or back-stabbing, no time-wasting meetings, no collections for leaving presents and no having to get dressed in skirts and suits in the morning. Best of all, it means I can organize my own schedule and take time off when I need to. In my case, this invariably means sloping off to ride my horse, a particularly liberating experience when I know I should really be at my desk hunched over my computer.

I’ve got it down to a fine art, screening in-coming calls on my cell phone and taking care never to answer work-related ones if we’re on a hard surface, for fear that the clip-clopping will give the game away. My horse also enters into the spirit of things and has learned to stop in his tracks the minute he hears the ringtone and not to move off until the call has finished.

But there is a flipside to every coin, and it’s not always easy living over the shop. For a start, you need bags of self-discipline and the ability to turn a blind eye to the fact that the apartment is a mess and that piles of dirty washing surround you. Fortunately, this is not a major issue for me, though I am sure that most of the Italian women I know would not be able to sit still for a second until they had whipped round the house making beds, clearing away the breakfast things and putting some delicious sugo on to simmer for dinner. In my case, the real problem lies not in resisting the urge to get out the Mr. Muscle, but in fighting the strong temptation to sneak in a quick episode from my new Martin Chuzzlewit DVD, or to curl up and read the Sunday Times.

The trick, I have long learned, lies in fooling oneself that one really is at the office. That means putting on a gruff, business-like voice when you answer the phone and letting personal callers understand that you are working and far too busy to prattle. The same goes for casual visitors. The trouble with this strategy is that not everyone picks up on the cues, especially here in Italy, where the fact that a woman is at home automatically means that she has nothing better to do than whip round the house clearing the breakfast things, making beds and making the said sugo.

The worst offender used to be my mother-in-law who, during her regular visits from Naples, would wander around the apartment broom in hand, sweeping around my desk, clattering pots and pans and generally making it impossible to concentrate. Since we had words on the subject, she has learned to tiptoe around, sweeping very very quietly and opening and closing doors and cupboards with great care and precision, which is of course just as distracting.

But the most annoying interruptions are those caused by constant ringing at the doorbell. At 10:10 a.m. on the dot, it’s the postwoman who can never seem to manage to cram our mail into the little box at the bottom of the stairs. For the rest of the morning, a regular procession of builders, electricity meter readers and Jehovah Witnesses troops past the door, each one eliciting a brusquer response than before.

The final straw came a couple of days ago, when a courier buzzed the entryphone. He instructed me to go downstairs to pick up a package. I told him curtly he would have to bring it up. A standoff ensued. I held my ground, and in the end he dragged himself up the stairs, and dumped the box at my feet. At last I can go back to work, I thought triumphantly. But I was wrong. As he turned to leave, he snapped: “Arrivederci. Lei é una stronza.”

Try settling back to work after that.