Legends of the fall 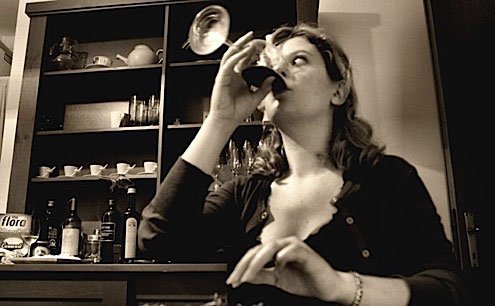 I am firmly planted in the “fall is the perfect excuse for reds”camp.
L

iving in Italy, I’ve concluded that my adopted country keeps time by a mysterious Big Ben located invisibly in the vicinity of one’s waistline. Its ticking depends on what chefs and mammas are stirring up in their kitchens.

Walk into any restaurant in October and you notice immediately that chefs and patrons alike have adjusted both cravings and cooking to suit autumn’s bountiful harvest. Piatti del giorno shift from grilled summer dishes to rib-sticking bowls of risotto con funghi porcini and plates piled high with steaming tagliatelle and pappardelle. If you’re lucky — and luck depends on the season — some of these pastas will be topped with wild game. If you’re still more fortunate, you’ll get another layer of decadence, paper thin slivers of rare and pungent tartufo bianco, Piemonte’s white gold.

Unlike their black cohorts, white truffles are rarely cooked — heat can diminish their delicate flavor.

As a result, picking the right wine to enhance the heady aroma of tartufo dishes produces lively debate. In the white wine camp, experts plead for Alba’s Langhe Arneis or a dry Tokay or Riesling, so that the truffle’s musky aroma isn’t overpowered or lost completely. Some even recommend a Roussanne blend, made from a somewhat rare variety of the same name, grown originally in France’s Rhône River valley but now cultivated in some Italian vineyards.

I am firmly planted in the “fall is the perfect excuse for reds”camp. The earthy scent of truffles makes me seek the best that Piemonte has to offer. Below are three white truffle pairing suggestions for red wines from the area surrounding Alba. They are big, spicy, tannic, and truffle-friendly.

— Ada Nada Barbaresco DOCG Vigneto Valeirano 2000 An elegant Barbaresco from the Langhe in Piemonte (subzone Valeirano). This wine has a long fruity finish and spicy leather undertone that blends well with rich egg-based pastas. It’s aged 20 months in French oak barriques, then bottled-aged without filtration for an additional 14 months before release. I recommend you decant the wine shortly before serving.

— Barolo, DOCG Famiglia Anselma 2002 Piemonte This family-run estate boasts the motto “Solo Barolo e Nient’Altro” (essentially, “Barolo alone”) in the spirit that a winery should focus on one product, and make it good. Aged in both barrique and barrels, the wine produced by the Anselmas is sassy, provocative, and garnet-colored with an enticing mineral and tobacco aroma. Its ripe berry and earthen highlights stay on the tongue for a silky finish. This is an excellent match for wild pheasant pastas. Like all Barolos, the tannins are quite strong and this wine is best opened and decanted at least an hour before serving.

— Marchesi di Barolo Barolo DOCG 2001 No point in talking about Barolo without recommending the Cantine dei Marchesi di Barolo. This estate dates back to the 12th century when Piemonte’s wine growing regions were controlled by landed nobility and Barolos were taking their first wobbly baby steps in the world of Italian wines.

Today the baby has grown into a sophisticated woman under the guidance of the Abbona family, which has owned the Langhe hills vineyard since 1929. The result is a classically elegant Barolo, with smoky plum-raisin highlights and an enduring peppery finish. Aged for two to three years in small Slavonian oak casks (new and used), the wine is bottled and aged for another six months before release. A long-term keeper, this Barolo can easily be cellared for up to 20 years.