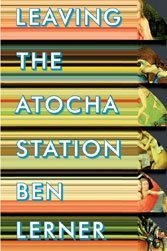 Meet Adam Gordon, a self-loathing American writer on a fellowship to Spain — the year is terrorism-tinged 2006 — to construct what he calls his “project,” a “long and research-drive poem” about the literary meaning of the Spanish Civil War, a subject he immediately claims to know nothing about. Adam is a “violent, bipolar, compulsive liar”; Adam is “a pothead, maybe an alcoholic”; Adam is convinced of the “total vacuity of my project.” So why listen to Adam, a blacker-than-black Woody Allen who once thought Ortega y Gasset was two people, like Calvin and Hobbes? In part because his suffocating self-consciousness and contagious adolescence has a wickedly funny side, and because his digging into fraudulence also reflects the 21st-century narcissism he works sneakily to break apart. One Spanish girlfriend bores him, another does not; the relationships, lived between tranquilizers and spliffs, are, to put it mildly, complicated.

Fulbright-winner Lerner’s semi-autobiographical Adam is bumpy light pouring from a reel-to-reel projector, a thing of a haze, headlights in a doe, the reversal of the known that proves only “reality’s unavailability.” In part, this is one kid’s fictional chronicle, diary-style, of a drugged out year in Spain, among fascinating aliens. But another equally important part is preposterousness and fraudulence as a state of human being, or being human, with the “performance art” of living and lying emerging as a result (call it, as Adam does, the consequence of “negative capability.”) Lerner is a clever writer, and at times a funny one, but using insecurity and spoofed self-absorption as a story-telling conceit has its limits. Adam isn’t really in Spain. He’s in Adam — “… a few strains of rumination away from full orchestral panic,” which means the act of looking inward repeatedly yields the same kind of kooky self-loathing. The comically malign act of mocking fraudulence turns ironic, as does the send-up of a “standardized” life. And, cleverness aside, the irony just won’t quit.

Though Atocha is the Madrid station where trains were blown up by a terrorist bomb, the title refers to a John Ashbery poem.