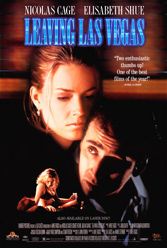 Mike Figgis’ perdition express of a flick gets to Nicholas Cage’s inner alcoholic in a disturbing way. Cage plays Ben Anderson, a flailing scriptwriter devastated by the loss of his wife and child. He slouches toward Las Vegas to die by drink. There, he meets hooker Sera (Elisabeth Shue), who taps into his downward spiral. They become accessories to one another’s hopelessness.

Figgis reveres dark-side excursions (“Stormy Monday,” “Internal Affairs,”) but this one is shattering because Cage and Shue — heartbreaking — absorb the action so thoroughly a movie doesn’t show through. Both deserved Oscars, and Cage won best actor. Years can pass without anyone coming close to making, let alone attempting, anything so emotionally true — and they have. Jazz-lover Figgis composed the music, which not surprisingly is a tribute to the Blues.