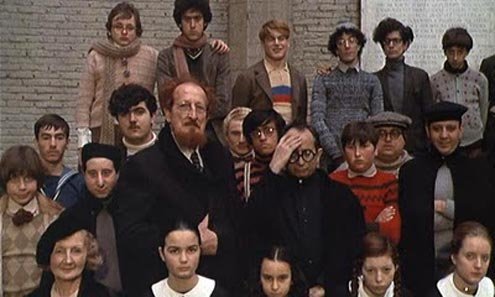 Teachers and students from Fellini's "Amarcord": Memoirs of mischief.
W

hen we decided to move to Italy from England just over a decade ago I’m ashamed to say we didn’t really do a great deal of research beforehand. It was one of those “feel good” choices that didn’t bear much agonizing over. Had we gone over it more sensibly, we might have never made the leap.

That’s not to say I regret it. I don’t. But there have been moments when I asked myself what on earth I thought I was doing. The main cause of the angst has been education.

Among our major motivations for moving was the improved quality of life we thought our children would enjoy. I believed that growing up in a country like Italy, where children were so adored, could only have a positive effect, and in many ways that’s proved true.

But the specifics of schooling have been a bit of a minefield.

Before coming, my knowledge of the Italian school system was limited to two autobiographical films, Federico Fellini’s “Amarcord” and Giuseppe Tornatore’s “Cinema Paradiso,” neither of which present a particularly inspiring pedagogical picture of the Italian school system. How could I know if things had changed much from those last-century portrayals?

I was reassured by the fact that Maria Montessori, an outstanding educator, was born in the very region where we intended to live, Le Marche (she was born in Chiaravalle, near Ancona). Surely some of her wisdom had filtered down to the local schools level?

Wrong. Or so it seemed to start with.

The first school my small sons attended was a nightmare. The teachers were downright mean and showed no empathy toward their little charges, some of who gaily fought among themselves with frightening violence when not being marshaled about. When I tentatively suggested, from my own nurture-first experience as a Montessori teacher, that my sons weren’t really enjoying their educational experience, the teachers just demanded to know just what was wrong with them.

It took me far too long to discover that my children could in fact attend any school of my choosing. We finally found them a small and pleasant one in a neighboring village, which is where they’ve been since those early alarming days. There, under the tutelage of some very kind ladies, they’ve all learned Italian, and have a strong good grounding in the three Rs. They also have absolutely beautiful handwriting. Albeit without much creativity — class drawings tend to look exactly alike.

My eldest son — who was four when we arrived — never approached school with a joyful heart. When he entered media, or middle school, things went from bad to worse. Finding it difficult, and feeling miserable, he wouldn’t study. I dreaded parent evenings. Finally, the school decided he should repeat the year.

At that point I’d pretty much written any chance of his ever enjoying his education, which led me to considerable soul-searching about our original decision to change countries. But then slowly, against the odds, things began improving. He gradually became a popular and happy young man.

Still, I looked to the next step, superiore, high school, with a heavy heart. I heard about impossibly difficult Latin classes and maths problems seen only at the British university level. I foresaw more misery for my long-suffering son.

I was wrong. His choices were abundant. He could pick between attending schools that specialized in science, languages, cooking, art, mechanics, woodwork, aviation, and music. He finally decided to study agriculture in nearby Macerata. The school operates a working farm that produces its own cheese, vegetables, wine and olive oil. He’s actually looking forward to it.

Moral of the story: Just when you think you have Italian life covered, in the worst of ways, along comes some icing on the cake that reassures you that you haven’t been a colossal berk after all. It makes being proven wrong a joy.