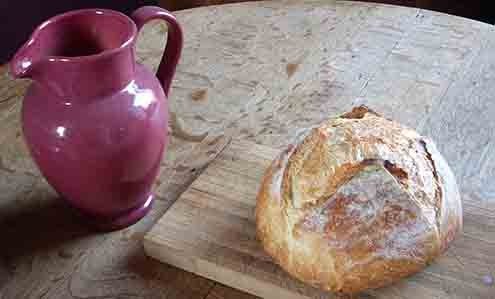 Making and baking good bread is easy enough, not it's not quick.
I

remember decades ago when the fruit you bought in Rome was much tastier. I could get peaches, oranges and plums in outdoor markets from sellers who grew them themselves – nostra produzione. Now, most fruit is huge, but also tasteless – taste sacrificed for speedier growth.

It’s the same for bread. Once bread anywhere in Rome was always tasty, with a good crust and a certain heft. Not so today. It’s too light when fresh and turns to rubber or dust by the next day. Why? Because good bread takes time to make. The flavors develop with slow maturation of yeast and flour. Bread made with care has a better texture and lasts days on end. I think of bread when I think of fast growth. An institution or a business grows quickly and everyone thinks that’s a sure sign of success. It means more jobs, finding larger premises, purchasing more equipment, all in a rush (and not always with good results).

My first job in Rome was teaching in a small American university called The American College of Rome. You won’t find it now. It went bankrupt just a few years after I started teaching there. The school grew very fast, moved from occupying a fourth floor apartment to a small building at largo Argentina in the city center. The growth was accomplished by accepting ever-increasing numbers of foreign students, a large proportion of which were from Nigeria. The country suffered a crisis and the students could no longer afford to pay the rest of their tuition installments. The school collapsed and we all lost our jobs.

In the face of such disasters, I always think of bread. Again, good bread takes time. Forget the store-bought variety made with raising agents or whatever they use to accelerate the process.

I started making bread in high school. My friend’s mother made it, and I couldn’t ever resist the smell of fresh bread emanating from her kitchen. The long procedure seemed daunting to me at the time and I first tried a recipe that speeded up the process with baking powder. It still smelled like bread but the taste left much to be desired. From there I tried many recipes. When my kids were small and I was home much more, I made bread regularly. Though fine bread was still readily available in Rome, I missed some American specialties, with oatmeal and molasses, honey and whole wheat, cinnamon raisin bread — these became breakfast and merenda staples.

When it started to become hard to find good plain bread, someone recommended the new recipe for artisan style bread originally published in The New York Times. I experimented with it and with other variations, eventually creating what is now my family’s daily bread. It takes 10 minutes to put together, 24 hours to rise (you can leave it unattended), another five minutes to shape and 45 minutes to bake. I think it’s as close as you can get to the bread I remember 30 years ago. We make our bread at home now, with minimum work and maximum taste. Is it easy? Yes. Is it quick? Absolutely not, and the refrain returns: Good bread takes time.

You can’t force organic substances to hurry up.

You can make bread faster, with more yeast, but it won’t taste nearly as good and won’t keep nearly as well. The flavor and texture of bread is a product of living plants, organic materials and a sort of magic that above all demands patience. You can’t force it to grow without sacrificing its complex nature and flavor.

Children are also complex beings made of many unseen living parts. They also require time and patience to develop fully. Some try to speed a child’s growth at every stage, with too much of another kind of “leavening” – they speed up the pace of toilet training, reading, math, independence. They try to ensure their kids outpace others. But development can’t be rushed, any more than bread can be rushed. Something will always be lost.

You can also speed up other kinds of growth, including economic, institutional, and industrial. But what does it get you? Recently a hastily built tower block in China toppled over just as it was completed. An institution, economic venture or city that grows too fast won’t have time to form the foundation, structure, and infrastructure to give it stability. The child pushed to grow, become independent and perform beyond his age, will be skipping those steps of slow growth that will be his own foundation, his own infrastructure, or, as in the case of bread, the full development of the many microscopic elements that make him a full and happy human being.

There’s a lot to learn from bread.