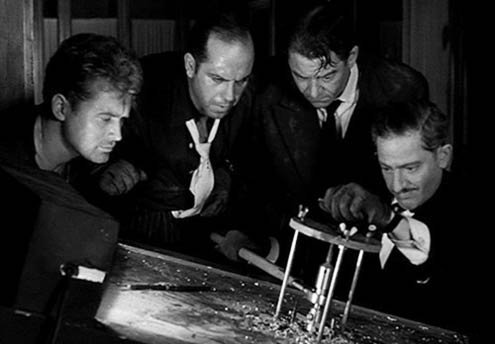 Before the men come undone…
B

efore novelle vague broke (and long before anyone wanted or needed Danny Ocean), came 1955’s “Rififi” (full title, “Du Rififi chez les homes”). No frills here. Hard-knocks Parisian losers plan and carry out the perfect jewel heist only to be done in by their own squabbling, a dead-end story director Jules Dassin milks for expression and anguish. Ex-con Tony (Jean Servais) gets an idea for a perfect jewel caper and puts together a crew that includes two Italians, Mario (Robert Manuel) and César (Dassin under the pseudonym Perlo Vita), and Joe the Swede (Carl Möhner). Their psychological makeup all but characterize noir, which fits in with the film’s nervous black and white.

There’s plenty of physical and sexual tension, but subtlety goes by the wayside during the central-Paris heist, which stops the film in its nasty tracks. Criminal excellence, for Dassin, is an inevitable prelude to men being men, which means handfuls of suspicion and primordial hatred.

Gender doesn’t perfume the action. Dassin’s women are just as cruel. Devoid of romance, Rififi (French slang for nasty stuff going down) is about losers who overstep and end up worse than they started. Avoid seeing this dubbed; it’s pointlessly unmusical in English. If necessary, forget languages and watch the bleak shapes slouch toward their unfriendly Jerusalem.

American has its own Jerusalem: Washington, and 1995’s “The American President,” a pre-Lewinski, Camelot-tinged story, retains its charm several presidents and lots of Oval Office boorishness later. Widower President Andrew Shepherd (Michael Douglas) lives in the White House with wiseacre daughter Lucy. The incomparable Annette Bening is lobbyist and activist Sydney Ellen Wade. He’s a stuffy but sweet. She’s the antithesis of Washington cynicism. All pretense collapses when the two meet and begin behaving like smutted teenagers. But erector Rob Reiner never lets his kind-hearted project succumb to the temptations of the mawkish.

How’s he do it? For starters, the president’s foil is chief-of-staff is one A.J. McInerney, played by… Martin Sheen. And who wrote the movie? A man named Aaron Sorkin, whose next project, TV’s “The West Wing,” would promote Sheen to Shepherd’s spot. No wonder Reiner’s planets aligned. Richard Dreyfuss is deliciously wicked as a senator who’d like to make hay from undoing the romance. Douglas is, well, Douglas – peddling his boyish smile. This is unadulterated fantasy for adults who can suspend cynicism long enough to conjure up romantic liberalism and remember a time when even adults beat around the bush before holding hands, a sort of pre-family value.

Less Chevy back seat-like and more ferocious is 1998 “Gia,” Angelina Jolie’s first noteworthy performance. If you’ve always seen her as just another pretty face, or worse, take a moment to watch her when she was young and hungry. In director Micheal Cristofer’s little-known made-for-TV flick she’s Gia Marie Carangi, who ferociously ascended to upper-echelon model status in the 1970s. Then came drug abuse, lesbianism, and AIDS. Carangi died of the disease in 1986.

It’s as if author Jay McInerney and Cristofer wrote this raw and then stumbled on Jolie. She preens, pouts, and finally accelerates all-out into a wall. Jolie gets to Carangi’s disintegration as if she sees it coming and can’t wait. It’s the kind of passionate and reckless performance (she was 22 at the time) that sex-symbol status makes you avoid, lest it sully your image. Here, Jolie is very much Jon Voight’s daughter: hurt, wild and fearless.