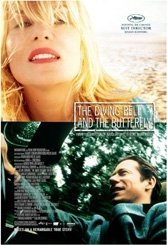 Director Julian Schnabel’s gorgeously-shot film tells the true-life story of a man who, in an instant, becomes trapped inside his own body. Jean-Dominique Bauby (played by Schnabel) is a successful fashion magazine editor (French Elle) who is dropped by a massive stroke while driving in the country. He becomes paralyzed, except for his left eye — he’s locked in his own body.

Excruciatingly, slowly he learns to communicate and, eventually, write his own memoir (which became a best-seller). This is not a Hollywood story of saintly triumph over adversity. Bauby still retains his capacity to hurt those who love him. It is instead a story of the human instinct for survival. The real Bauby died two years after his stroke, a week after the memoir was released.