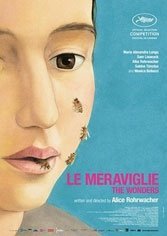 With story about a quirky, bee-keeping family getting by in a crumbling farmhouse in rural Tuscany, a maturing young girl (played by Alice’s sister Alba) and the arrival of a juvenile delinquent with communication problems, Alice Rohrwacher’s “Le Meraviglie,” which won the Grand Prix at this year’s film festival in Cannes, promises hopefulness. Instead, menace and suspense abound.

Something feels bound to explode. The anger of the German father (Sam Louvyck), which hint at a German Red Army Fraction past, might boil into violence. Bee swarms might escape control. Puberty’s dark side might erupt. The Etruscans, whose sacred spaces are violated, might rise violently from their graves. Any spark could ignite the ramshackle structure of a family held together by the hard work and constancy of 12-year-old Gelsomina, the eldest daughter and only mature figure in the lot.

When German social services place rehabbing Martin (Luis Huilca) in the family’s care, the crumbling of the whole seems like a sure thing. Instead, it is the invasion of a trashy reality show troupe whose tinsel opens Gelsomina’s eyes to another world, exposing the frailty of home life and eventually pushing the family over some unfathomable edge. Touches of magical realism, images of natural beauty and satire (heavy-handed) relieve portions of the menace. Ambitious and beautiful films such as this offer many rewards, but a simple vision of growing up in sunny Tuscany is not one of them.