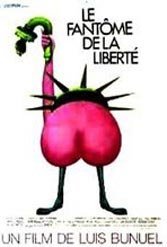 The French have a neat phrase for the flux of social life, mœurs et coutumes, mores and customs, namely life details that distinguish one society from another. Few directors were ever so amused by them, and so enjoyed perverting them, than Buñel, a Spaniard who scripted his mind in French. Mid-century French urban habits delighted him for their attention to form and repetition, insulting his keen surreal side. Take some of the things that happen in this skit-laden movie: A middle class couple politely shows up at a Paris police station to report that their daughter is missing from school. What, asks the police prefect, does she look like? The couple pauses to examine their daughter, who of course is seated beside them. Panic is absurd. So is wonder. Aspects of life middle class habits don’t allow for.

Roughly connected skits help put flesh on Buñel’s absurdist tableau. One after another, they lampoon France’s intrinsic unwillingness to lighten up, burdening “liberty, equality and brotherhood” until it collapses under its own weight. A husband having bizarre visions that include a nighttime mailman goes to a shrink who ridicules the man even though he has a letter from the mailman. Tanks hunt foxes. Monks play poker. A convicted mass murderer is released to sign autographs.

Buñel made this film at 74, a time of life when memories of things past can wreak comic havoc. Time and again, democratic life and civil order turns absurd. Liberty is a phantom because it means anything can happen; democracy is a jokester because its vaunted values invite mockery.

For Buñel, freedom is hilarious, asymetical, a phantom that neither communism nor capitalism know to control. His connected anarchism is a form of ironic mockery that never once violates the good manners it means to shatter. Little could Buñel imagine that bits and pieces of what he once saw as social asymetry — a mudering sniper first sentenced to death only to be set free into celebrity status — would become adjuncts of postmodern reality.