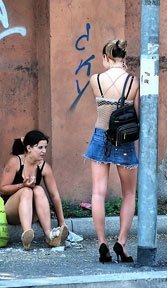 Via Salaria, Rome: Who cares about the fines?
T

he other day, as Fabio and I headed out of our apartment for dinner with friends, we heard our third-floor neighbors in a screaming match. Since we live on the sixth and top floor and our walls are thick, we’re usually spared the joy of getting to know everyone else’s business. But this fight couldn’t be tuned out.

I couldn’t make out much except for a few “Vaffas” and “Get the hell out of heres” from the livid wife.

It was pretty bad. So bad that I asked Fabio whether he thought we should check in on them.

He looked at me as if I’d just checked in from Mars. “Me?” he replied. “No way. I’m not getting into anyone’s business.”

Later, at dinner, we described the lover’s quarrel to our friends. One of them immediately piped in. “Sicuramente, lui avra fatto le corna a lei.”

His theory was that the husband had probably cheated on the wife and she’d found out. End of story. After which came shrugs and nods. No one missed a beat in ordering pizzas.

At that instant it hit me just how lightly Italians take the subject of infidelity. If it happens it happens. Sure, better when it doesn’t. But still.

It made me think of the road I drive every day to get home. Day and night, cars line up and even blocking traffic so men can pay for some street lovin’.

Didn’t Rome Mayor Gianni Alemanno campaign on a pledge to get hookers off the streets? Dream on. They’re still out there in living color. Cops zip by them every day. Not a thing happens. (Okay, police have the right to fine clients between €200 and €500, but when does that happen?)

Out of curiosity, I sometimes slow down next to the cars to get a glimpse of the customers. They’re usually middle-aged men in family-sized cars. Some have baby seats. I feel like rolling down my window and yelling, “Working late tonight huh?”

But I come back to my senses and keep driving. Oddly and conveniently enough, just past my red-light strip are a couple of billboards with the name and number of a private investigator. “Having trouble sleeping at night? Stop worrying about it and call us.” Just like that. Normale.

Lover’s lane and the billboards are a constant reminder of just how normal “le corna” (or cuckolding) is in Italy. Some people speak openly and comfortably about cheating. The other day I was chatting with my barista where I usually have breakfast. He knows I’m American. He likes telling me about his dream trip, coast-to-coast across the United States.

He then tells me about the cities and tourist spots he’s visited: Sharm El Sheik in Egypt, Vienna, Paris and Prague.

But Prague didn’t make the grade. “No, Praga, nun me piace,” he said in his thick Roman accent.

I gave him a surprised look. “Why not? I heard Prague is so beautiful.”

He went on to tell me his view that many big European cities had turned into havens for sex tourism beckoning men prone to cheating. Many of his married friends hit up these spots for “work” or “weekend getaways” or for a “cultural” trip. But then, wink, wink, “culture” turned into paid pleasure.

“Hmm,” I said. Though I’d nearly finished my cornetto, Dario insisted on finishing his story. “Don’t get me wrong, Prague was pretty, but I didn’t like having the temptation around me. Luckily, I was with my wife. But even so, if I really wanted to I’m sure I could have snuck away and you know….” More winks.

If Dario wanted to sneak around he wouldn’t need Prague. He could hit Rome’s Via Salaria, where the “cultural” choices are endless. Then again, he’s not that kind of person. He doesn’t like prostitutes.

Cheating also has a special role in Italian movies.

Take the money-tree “Natale in…” Christmas franchise that rolls around each year. The movie features major Italian comedians (Christian De Sica, Massimo Boldi) and the season’s hottest “velina,” or showgirl. A big, sloppy fun movie for the whole family, right? Except that De Sica (typically playing the husband) often cheats on his wife with a younger woman or hooker. The sad truth, of course, is that the movies accurately replay bits and pieces of Italian life.

It might not get everyone to sing Christmas carols, but maybe De Sica should reconsider renaming the Christmas franchise. Instead of being “Natale in…” it would be called “Le Corna in…” Let’s see how that does.