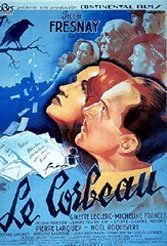 In Henri-Georges Clouzot’s 1943 thriller “Le Corbeau” (“The Raven”), a provincial town in France unravels into paranoia and distrust when the locals begin to receive anonymous letters. Each letter contains a heinous accusation and a cryptic signature: “The Raven.”

The letters incite the townspeople to betray and vilify one another, while the identity of The Raven remains unknown. Doctor Remy Germaine, played with the restrained, ice cool control by Pierre Fresnay, is the central victim. The Raven’s letters accuse him of carrying on an affair with pretty but modest Laura (Micheline Francey). Laura is the wife of his hospital’s head psychiatrist Dr. Vorzet (Pierre Larquey), who despite allegations that he’s a cuckold, speaks with unsettling cheer. Even more unsettling is his insistence that he and Dr. Germaine remain friends. As rumors of the adultery spread, so do rumors that Dr. Germaine is an abortionist, and the townspeople are prompt to sever relations with him.

Only the beautiful but limping Denise (Ginette Leclerc) asks the doctor to continue visiting her. Denise, a car accident victim who becomes Dr. Germaine’s one-time lover, is so sick with adoration for him that she wavers on the tip of violence. She’s later suspected to be The Raven, writing the letters out of spite for the man who refuses to love her.

Leclerc’s unrestrained acting and wild facial expressions rival those of her contemporary Gloria Swanson. The drama that Leclerc unleashes as Denise creates some of the freshest and most engaging scenes in the film. Leclerc’s acting is so acute, in fact, that when Denise declares her love to Germaine, he knows that acting is all she’s doing. “You don’t even know what love is,” he sighs. “You’re just playing a farewell scene.”

Upon its release in the midst of World War II, “Le Corbeau” caught the ire of both the political left and right in France. Wartime sympathizers viewed the film as a condemnation of the Nazi occupation. After the war, leftists considered it an assault on French unity. Today “Le Corbeau” is best understood as a criticism of something more timeless: the hazards of propaganda.