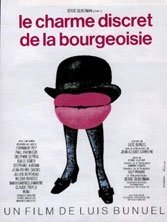 Rare is the movie whose name has such a tidy handle on irony. Rich-kid Buñel not only came from a proper Spanish family in an Aragón town untouched by modernity, he was also Jesuit educated. The combination and time spent later spent in Madrid and Paris gave him an acute awareness of bourgeois unflappability and effrontery, always particularly spectacular at dinnertime. The story line involves a series of failed efforts among six well-off friends to dine together, each one disrupted or corrupted by surreal distractions.

At one place, the owner has just died; a tea house has only water (and the talkative ghost of a dead lieutenant); yet another spot turns out to be a theater set. Women terrorists also make an appearance, since one of the diners is Buñel favorite Fernando Rey, who plays Rafael Acosta, the French ambassador to the fictitious Republic of Miranda. When they dream, which is often, the hungry six worry not only about personal embarrassment but also about lurking enemies. Status and uprightness requires constant vigilance. But Buñel won’t stand for it: He inserts the dreams of one character into the paranoia of another, laying out the conditions for conflict. Yet the diners are undeterred. Despite ghosts and sundry distractions, they expect to be fed.

Buñel uses both gentle and aggressive surrealism to poke fun at an entitled class that lies, tricks, cheats, and deceives, but puts meals ahead of all else. They would probably dine in the Buchenwald mess hall, but Buñuel, out of propriety, stops short of the offensive, letting his characters evidence their hypocrisies through bumbling. It’s a ruthlessly comic ride by a director who knew the foibles of what he filmed